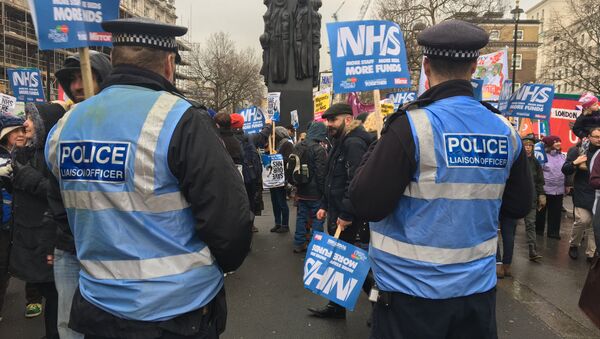 The National Health Service (NHS) in Britain has been bracing itself for the challenges of winter, struggling to cope with staff and funding shortages. Demanding "more staff and more beds" for hospitals, thousands have joined a demonstration on February 3 in the center of London.

Called by The People's Assembly and Health Campaigns Together, the protest was joined by doctors, nurses and NHS staff calling for better funding and bringing the healthcare system "into public hands away from the waste and demands of shareholders and bankers' bonuses."

The National Secretary of The People's Assembly Sam Fairbairn told Sputnik that for the last few years the NHS has been going through a winter crisis.

"We've seen hospitals completely overstretched, people dying in corridors, people have to be treated in ambulances in hospital car parks by nurses because there is no space inside the hospital. It is obvious, from talking to every single healthcare worker that hospitals are at their limit or past it. The government is doing nothing in any kind of serious way to fix the crisis. Instead they are denying the crisis is even happening. So we are organizing a demonstration to say the NHS needs more staff and more [hospital] beds."

The NHS has been beset by staff shortages, lack of funding, longer queues for in-hospital and Accident & Emergency treatments. The current government led by the Conservative party has pledged to improve patient safety in Britain.