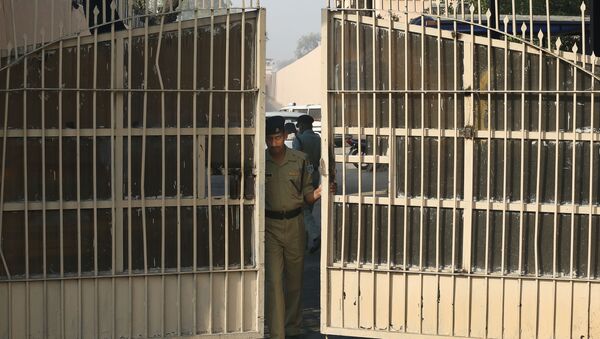 © AP Photo / Saurabh Das
Subscribe
For the last six months, music has reverberated through South Asia’s largest prison complex – the Tihar jail – every morning and jail authorities feel that it is having a curative impact on inmates’ aggression.

New Delhi (Sputnik) — For the first time in the history of the massive prison complex established in India's national capital of Delhi more than 60 years ago, it has a music band to boast of. "The Rockers," as the band is now called, is comprised of inmates who struck a chord when they found their interests in music converging on the common goal of forming a rock band. They came together and decided to pursue that goal.

"Only one or two of them have a professional music background, the rest of them were inspired by their colleagues and are still amateurs, but the passion [with] which they perform is an inspiration to many," Prawesh Lama, a senior writer for The Hindustan Times English daily who recently visited the jail, told Sputnik.

It's not just about the quality of music, but also the change the music has brought to the lives of these youngsters, who are otherwise sheer criminals for the rest of the world, he added.

Indian State Adopts 'Cow Therapy' to Reform Prisoners
Of the eight members of the rock band, some are serving sentences for murder, robbery and even for petty crimes like snatching.

"One of the noticeable things they say is that the behavior of fellow prisoners towards them has changed considerably and the members of the band take it as their precious earning," Lama told Sputnik.

Jail authorities say that the idea of forming the band came from the prisoners themselves and the administration found the idea workable.

"It was their idea and we thought it was a good occasion for us to encourage them. We did not think twice before providing them with the necessary infrastructure and musical instruments," Subhash Chander, one of the jail superintendents, told Sputnik.

The captive environment makes youngsters aggressive, Chander noted, and he found through this experiment that the music has a curative value for aggression.

Encouraged by the response of the inmates, Tihar jail authorities have now converted Jail no.1 into a music hub and every morning interested members are free to come and practice music.

Tihar has been popular for its altruistic initiatives including skill-building drives, education facilities for inmates and also a center of livelihood where inmates earn by monetizing their skill sets.