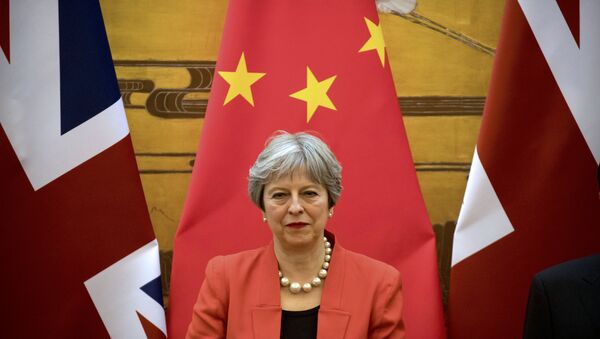 Theresa May is visiting China this week aiming to create new trade ties with the Asian economic superpower as the UK prepares for a post Brexit future.

The Prime Minister will be under pressure from parliament to speak out about alleged human rights abuses in former British colony Hong Kong; now under Chinese rule. Sputnik spoke with Yongjin Zhang; Professor of International Politics at the University of Bristol to gain an insight into contemporary British-Chinese relations.

Sputnik: Will China be open to forging new trade links with the UK following Brexit and what will Britain have to give China in return for a deal?

Yongjin Zhang: China needs Britain as much as Britain needs China. Obviously the Chinese have promised to open their market, probably mostly in agriculture to the benefit of the UK economy.Hopefully; and this is probably a very difficult decision for the European government, is the export of technology. There are still sanctions on China imposed by the EU, particularly in dual use technology; which could be used in the military, so that’s probably what the Chinese will want the UK to do in exchange for an open market.

Sputnik: Does China currently have good relations with the EU as a whole?

Sputnik: Will Theresa May discuss the Hong Kong political situation during her visit?

Yongjin Zhang: I think she will probably discuss the issue with President Xi today behind closed doors. Partly; Theresa May has to please her domestic audience and I think the Chinese understand that, as long as it’s not a public condemnation. The Chinese side would like to have this quiet diplomacy to see whether they can agree to disagree or try to reach some kind of understanding and agreement.

I think what is very important for the UK, is the image of Britain still being a global power. Theresa May will talk to Xi about further developing the strategic partnership between the two countries concerning global issues such as security and economic development. The UK and China both have a role to play.