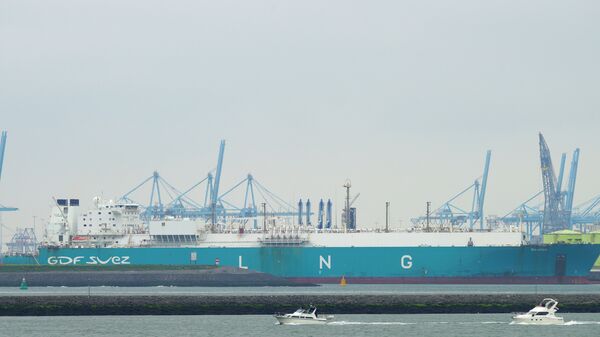 Increasing US sanctions pressure on Russia does not prevent America from purchasing Russian liquefied natural gas (LNG) from Yamal. While the US is unloading the first tanker with Russian hydrocarbons, the second one is ready to head for the US east coast.

At a meeting with representatives from the Franco-Russian Chamber of Commerce and Industry, Russian President Vladimir Putin spoke about the shipments of Russian gas to the United States.

Volga Group Owner Gennady Timchenko noted that the fact of the delivery is already known, but "we do not talk about it, because we are afraid." In response, Putin stressed that information has already been circulating in the media, and there is nothing to be afraid of.

"I'm not a businessman, and I think it's possible to talk about it," Putin added.

On January 28, the Gaselys tanker of the French company Engie with the first batch of liquefied natural gas from Russia docked at the port of Boston, USA. This is the first time when gas from the Yamal LNG plant, which is currently under the US sanctions, has entered the US market.

Russian LNG is Likely to See Opportunity in China Amid Gas Shortage - Analysts
According to Alexander Novak, the head of the Russian Energy Ministry, "although the molecules are from Russia, the gas is no longer Russian," as French Engie purchased it from Malaysia’s state oil and gas company Petroliam Nasional Berhad (Petronas).

It is also known that the second tanker with liquefied natural gas from Russia called Provalys is preparing to head for the US. It is due to reach the final destination on February 15.

Yamal LNG is located in the Russian Arctic. The project comprises natural gas production, liquefaction, and shipping. The facility is a joint project of Russia's Novatek, France’s Total, China National Petroleum Corporation, and the Silk Road Fund, which hold 50.1, 20, 20, and 9.9 percent of the shares in the project, respectively