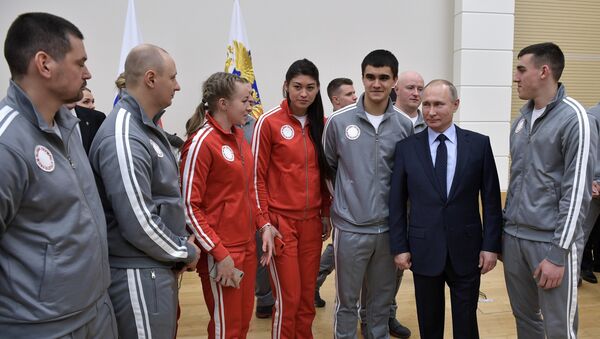 The Court of Arbitration for Sport (CAS) has acquitted 28 Russian athletes who filed an appeal against the International Olympic Committee's (IOC) ban for life in connection with doping abuse allegations.

"We must not only respect the decision of the court, which is certainly pleasing for us and confirms our position that the majority of our athletes are clean. But we must also respect the side with which we argued. Therefore, I think that there should be no euphoria on our part, we should react to it calmly," Putin said, adding that Russia has to treat its opponents in court with respect.

He went on to note that Russia has to continue its efforts to counter the doping violations in sports. He said Moscow will carry on its work with the World Anti-Doping Agency (WADA) and IOC and other international organizations to achieve this goal.

The statement comes after CAS annulled the sanctions against 28 athletes and ruled to reinstate their results at the 2014 Sochi Olympics. However, the IOC later said in a statement that the ruling doesn't mean the athletes will be invited to the upcoming Winter Olympics in South Korea's Pyeongchang.

CAS has also partially allowed the appeals for 11 Russian athletes: the IOC decision on them was upheld, but the lifetime ban was reduced to the expulsion from the Winter Olympics that will kick off next month.

The Russian athletes turned to CAS after the IOC had banned 42 of them over doping abuse from Olympic competitions for life and revoked their results at the 2014 Sochi Olympics.

The IOC has announced that 169 Russian athletes can participate in Pyeongchang's Winter Olympics under a neutral flag.