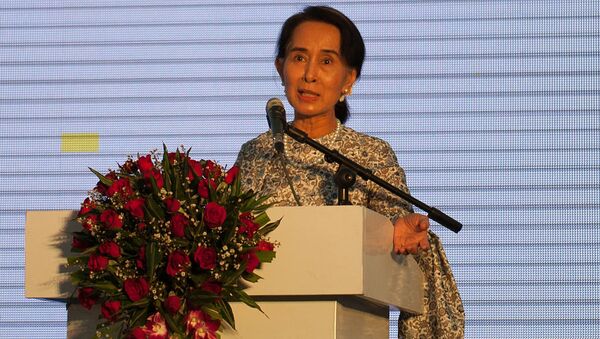 The motive for the reported attack hasn't been immediately clear.

A "petrol bomb" has been thrown at the Yangon compound of Myanmar's leader Aung San Suu Kyi, a government spokesman told AFP.

According to Zaw Htay, Aung San Suu Kyi wasn't at the residence at the time of the apparent attack.

The motive for the reported attack hasn't been immediately clear, however, the situation in Myanmar has been extremely tense since the escalation in August 2017, when Rohingya insurgents attacked government security posts. The attacks prompted a response by Myanmar’s authorities, which resulted in clashes and the deaths of hundreds of Rohingya, and forced thousands of others to flee to Bangladesh. The situation has been harshly criticized by the global community, which has called for an end to violence.

The conflict in Myanmar's Rakhine state between the Rohingya and the Buddhists dates back to the previous century. Central authorities and the Buddhist population consider Rohingya to be undocumented immigrants from Bangladesh.

Aung San Suu Kyi, the laureate of the 1991 Nobel Peace Prize, was prohibited from becoming the president of Myanmar due to a clause in the Constitution, however, she assumed the newly created role of State Counsellor, a role akin to a prime minister or a head of government.