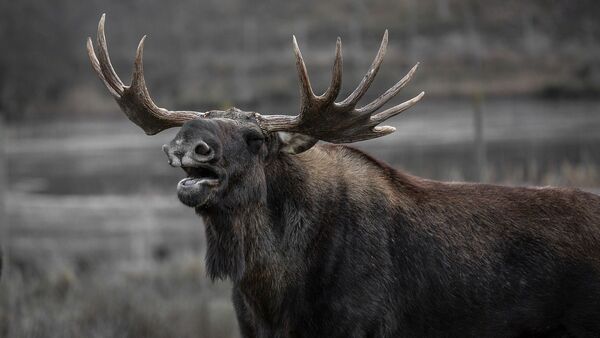 CC0 / /
Subscribe
Indeed, the Nordic country's officials had a hard time explaining the cause of the traffic delays.

An errant moose, presumed to be hungry and confused by the recent snowstorms that have paralyzed the Norwegian capital Oslo lately, ended up into the Bærum suburb and fell from a bridge overhanging the tracks of the Oslo Metro (T-bane), a rare occurrence in major cities. Alas, the moose did not survive the fall.

Jan Rustad, spokesman for the metro line affected by the incident, had to put forward an unbelievable explanation for the cancellations on the Kolsås line.

"There is a moose that has fallen down from a bridge over the tracks at the Gjønnes station," Rustad told national broadcaster NRK.

The animal was so badly injured by the fall that it had to be put down by the local wildlife authorities. According to Rustad, the moose was likely spooked and jumped over the protective railings on the bridge, breaking his legs.

Remarkably, a similar freak accident occurred in the city of Hamar, northeast of the Norwegian capital, during the weekend. A young moose roaming over a 12-meter-high bridge suddenly hopped over the railing, only to fall to its death as well, NRK reported.

"What happened today was an unfortunate coincidence that the moose was scared when a car was passing by. The driver cannot be blamed," Hamar wildlife committee leader Ove Magne Dufseth told NRK.

Generally, he encouraged people not to follow up moose that err into cities.

"When left alone, they usually return to the forest by themselves," Dufseth said.

With bulls reaching up to 700 kilograms, moose are not to be pushed about.

Norway has a moose population of 120,000. As in fellow Nordic countries, road signs with moose and together with fluffy moose toys are a fixture in the Norwegian souvenir business.

#funfact Moose signs get stolen in #Norway but we need them https://t.co/0bMW1sBfUI Not a souvenir from #EFA2016;) pic.twitter.com/DuZeRpQENd