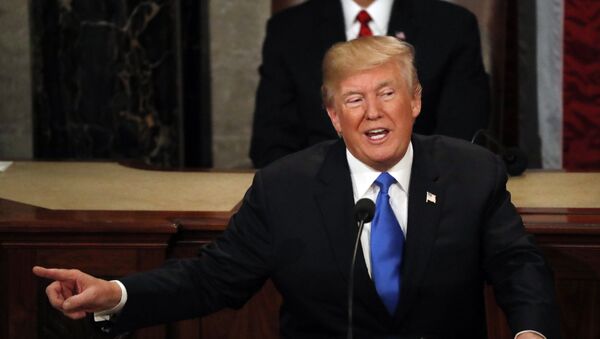 © REUTERS / Leah Millis
Subscribe
International
India
Africa
On Tuesday night, US President Donald Trump gave his first State of the Union address and spoke about his accomplishments in his first year as commander-in-chief while also dishing out details on what's to come in the new year.

The latter is a phrase Jodi Dean, professor of political science at Hobart and William Smith Colleges finds irritating.

​Speaking to Sputnik Radio's Loud & Clear, Dean said that if 45 wants to call coal "beautiful," he needs to realize how it's mined.

"What's really frustrating about the ‘beautiful clean coal' line is that even if you believe in a fantasy world where there is such a thing as clean coal, you have to then acknowledge the fact that the mining of that coal is done by actual people, by workers in the coal mines," she said. "This birth of ‘beautiful clean coal' is ridden on the backs of the working class."

"In other words, there was a decline in coal deaths in 2016, the lowest amount of coal deaths ever since mining coal had begun in the United States and that went way back up in 2017, so Donald Trump's victory here for clean coal is ridden on the backs of these miners," the professor added.

Ted Rall, an award-winning editorial cartoonist, noted the irony of Trump's moves to open more offshore drilling sites in the US while touting the amazing qualities of coal.

"Trump is opening up the West and East Coast — except Florida because of Mar-a-Lago — to offshore drilling, so that's going to increase oil production," Rall told show hosts Brian Becker and John Kiriakou. "The US is already producing more oil than Saudi Arabia… you can't really say that you're pro-coal while encouraging all of the main competitors to coal as well."

POTUS' coal comment wasn't the only upsetting remark that was made, Dean told Becker.

"I was really struck by Trump's claim for love and support of Puerto Rico, given that 30 per cent of Puerto Rico is still without electricity and there is over 3 per cent of people who don't even have access to drinking water," Dean said. "And now with FEMA cutting off water and food distribution, what's going to happen to all of these people?"

"It doesn't seem to me that the government has their backs at all," she noted.

In true Trump fashion, there was more than one insult in the late night speech, Dean added.

"We need to really draw out the unfortunately all-too-predictable racism of Trump's speech," Dean told Kiriakou. "The way that he was demonizing immigrants, the way he treats all immigrants as somehow the same as a tiny, miniscule number of gang members [and] the way that he implicitly condemned [former NFL player] Colin Kaepernick in the ‘take a knee' movement to end police brutality."