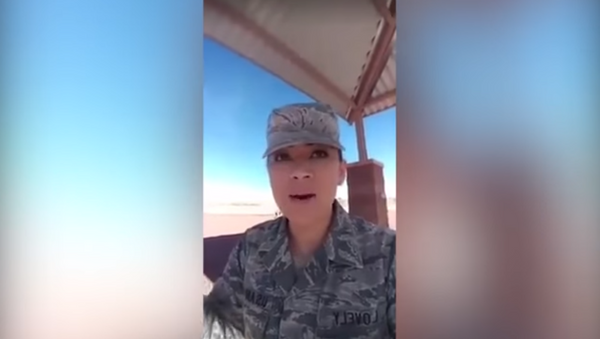 On Monday, Nellis US Air Force Base announced that one of its technical sergeants had been suspended from service after she posted a racially charged video on social media over the weekend.

According to a statement by officials at the Nevada base, Technical Sergeant Geraldine Lovely will remain under investigation "while leadership continue to gather facts regarding this incident."

"Leadership are exploring disciplinary actions and are checking to see if this is a broader issue on the base," the statement added. "While the actions of this individual are inappropriate and unacceptable, we are using this unfortunate situation to continue a dialogue with our Airmen about the topic of good order and discipline, as well as adherence to the Air Force Core Values."

The video, which Lovely initially recorded via Facebook Live to rant about the lack of respect she was shown at work, was posted by someone else in a private Facebook group called the "Nellis Burn Book" Sunday. It gained more attention from netizens and officials after it was reposted by another person into a public Facebook page geared toward service members in the US Air Force.

​"[These] f**king issues with my airmen and my NCOs, that are lower ranking than me, but they're black females. And it pisses me the f**k off that they have no f**king respect and constantly having an attitude, and what the f**k is up with that?" Lovely says within the first 20 seconds of the video. "Like I'm trying my best to hold my professionalism with them, but good God, that they don't have f**king respect whatsoever."

"Everytime I talk to them, they're like 'No, ma'am,' [but] it's just like they're talking down to me and I'm trying to tread lightly as a higher-ranking NCO not to f**king blow the f**k up and start a fight club," the upset Lovely dragged on. "But why is it that every time I encounter my subordinates that are black females, they have a giant f**king attitude?"

Lovely goes on to say in the video that she doesn't "come to them with a f**king attitude" and that she feels she's looked at as "just some f**king stupid ass girl that doesn't even… deserve to be talked to as a person."

"[The video is] inappropriate and unacceptable behavior in today's society and especially for anyone in uniform," Sukach commented in the public Facebook page post. "Leadership is aware and is taking appropriate action."

Sukach isn't the only service member concerned about the video.

"It's not an issue of race," one Facebook user commented. "You don't know how to effectively interact, lead or build a positive relationship with your subordinates."

"All African-American women don't have attitudes… you're just intimidated which is not our issue, it's yours," another wrote. "This isn't just for her, but for the ones I've encountered too. Learn how to be an effective leader and not just wear the rank."

Despite the outrage, Lovely hasn't exactly stayed quiet on the issue, Military.com reported. According to the outlet, the suspended official commented on the Nellis Burn Book page by saying, "Thank you for ruining my career." She later went onto the public Facebook page and wrote, "Are you kidding me? How dare you post this when the issue was settled and I apologized that I worded my rant inappropriate without thinking."

Lovely has yet to make an official statement on the matter.

On Tuesday, Major General Peter Gersten, the commander of the Air Force Warfare Center at the Las Vegas base, released a statement saying that Lovely's video "has no place on our Air Force."

"We are responsible for what we say and do whether in person or on social media," Gersten wrote. "Let me be completely clear when I say that any type of activity that disparages anyone because of their race, religion, gender, or sexual orientation will not be tolerated. Toxic workplaces and toxic leaders will not be tolerated."

It is unclear at the moment what further steps will be taken in the matter and if Lovely will face any other disciplinary actions.