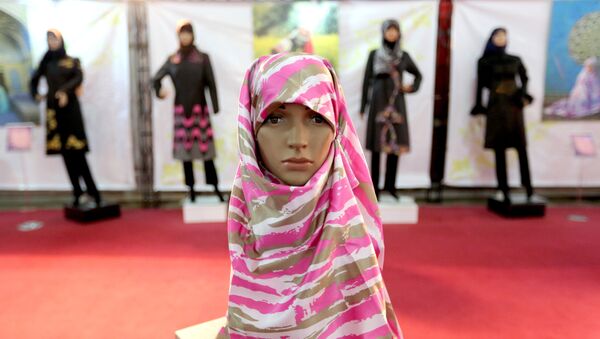 At least two women have been detained by Tehran police after they stood on pillar boxes in the street without wearing their compulsory headscarves in a show of protest.

Iran's chief prosecutor Mohammad Jafar Montazeri has described women's protests against the mandatory wearing of a headscarf in public as "childish."

"This is a trivial matter and not a matter of concern. This was a childish move by a young girl taking off her scarf, where some are carrying on with their daily lives," he said.

Montazeri also suggested that the protests could be instigated by foreigners.

"I think those who committed these acts did it out of ignorance and through being incited. They could have been influenced from outside the country," he noted.

Another iranian brave woman waving her headscarf in protest of compulsory hijab and lack of freedom. #دختران_انقلاب #دختران_خیابان_اتقلاب. pic.twitter.com/VvlghUPZzJ

The remarks came shortly after police apprehended two women protestors who stood in a Tehran street without wearing their compulsory headscarf.

A courageous 31-year-old woman who waved a white headscarf in a public protest against compulsory #Hijab in #Iran was reportedly arrested.
She has a 19-month-old child.#Iranians and the international community ask the #Iranian regime:#WhereIsShe?! 💁🏻‍♀️#Where_Is_She pic.twitter.com/n45dlP7KLR

They carried signs to call for freedom of choice for women, with one sign reading: "I love my hijab but I'm against compulsory hijab."

⬇️On this street and in this place, the first girl protest against obligatory headscarf.
The Iranian regime has put the police car here in fear of protests continue#IranianProtests #IranUprising #FreeIran #FreeAllProtesters #GirlOfEnghelabStree pic.twitter.com/YH7LkF74zm

At least eleven women took part in the protests, which was even supported by some conservative Iranians.

Police have reportedly set a bail of more than 100,000 dollars for one of the detained women as Twitter users were quick to post photos and videos of the "brave" participants.

Iranian woman detained after defiantly taking off her headscarf & holding it on a stick in #Tehran has been freed, a human rights lawyer says.
https://t.co/6khOes5M9p pic.twitter.com/9swUTB5H3F

Islam, which is Iran's official religion, stipulates that wearing headscarves and modest clothing for women in public is obligatory.