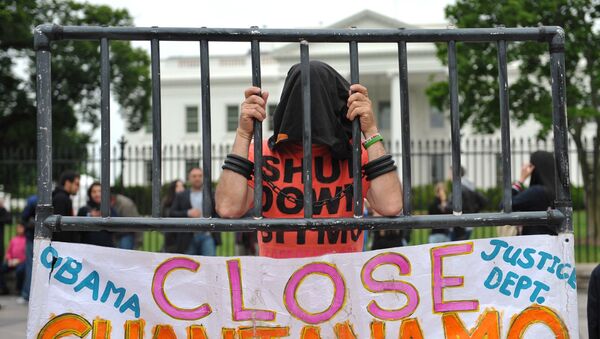 "Trump’s planned executive order is not the last word on the fate of Guantanamo… CCR has filed a new legal challenge to the illegality and racism driving Trump’s Guantanamo policy and demanding detainees’ release. It is the courts, not the authoritarian-in-chief, that will ultimately determine the fate of the men detained at Guantanamo," the CCR said in a statement issued on Tuesday.

According to the CCR, the move is unsurprising given "Trump’s deep-seated racism" and the situation, when the White House is "stacked with white supremacists."

On Tuesday, the US leader delivered the first State of the Union speech during his tenure. In the address, Trump said that he had signed an executive order to keep Guantanamo open. Decisions on disposition of terrorists detained at the Guantanamo Bay Naval Base will be taken on a case-by case basis, the White House said in a release following Trump’s signing of the executive order on "Protecting America Through Lawful Detention Of Terrorists."

The United States may transfer new detainees to the Guantanamo Bay prison in Cuba if needed, according to the executive order signed by Trump.

The order also said that US detention operations at Guantanamo Bay are safe, legal, humane and consistent with international law.

‘Abysmal’ Treatment: UN Notes US Still Torturing Uncharged Guantanamo Prisoners
In the wake of 9/11 attacks, Washington opened a detention center for terror suspects at the military base at Guantanamo Bay. As suspects deemed dangerous may be subjected to indefinite detention without charges of trial in the prison, the facility is largely criticized by domestic and international watchdogs as violating human rights.

The detention center has housed suspected terrorists from Afghanistan, Iraq, Saudi Arabia and Yemen since 2002, many of them without charges.

The facility has long been criticized for the mistreatment and abuse of detainees, prompting many to call on the US authorities to close the facility. Barack Obama vowed to take action but the Congress vetoed his plan to bring inmates to the mainland.