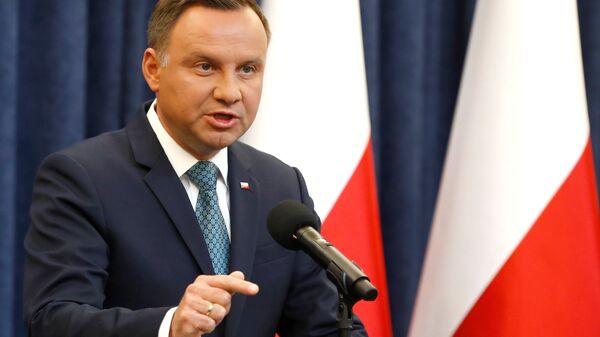 A new Polish legislation forbids any mention of participation of the Polish nation in crimes committed by Nazi Germany during the Holocaust, particularly the use of phrases like "Polish death camps," where millions of people, mostly Jews, were slaughtered by the Nazis.

Polish President Andrzej Duda has stated that he would never allow his country and Polish people in general to be "vilified" though "false accusations" of the alleged involvement in the Holocaust, a claim that has been repeatedly denounced by Warsaw.

Duda has emphasized that there was no institutionalized participation by Poland or its people in the Holocaust, while admitting that some Poles took "wicked" actions against the Jews.

Duda's statement apparently came in response to Tel Aviv's outrage over a Polish bill that would outlaw public statements assigning responsibility to "the Polish nation" for crimes committed by Nazi Germany during World War II. The legislation, approved by the Polish parliament’s lower house on January 26, was slammed by the Israeli leadership, accusing its authors of attempting to distort the historical truth.

In response, Israel summoned the Polish envoy to express the country's "opposition to the wording of the bill," which has been passed on the eve of International Holocaust Remembrance Day.

Two days later, the prime minister's office announced that Israeli Ambassador to Poland Anna Azari and her staff would discuss the issue with the Polish leadership, including Morawiecki, President Duda, and the parliament’s upper house later this week.

The Polish Institute of National Remembrance called Israel’s interference in the situation around the bill, before it had even become a law, inappropriate. The new legislation does not limit scientific research and the freedom of speech, but tackles the deliberate distortion of history, the institute said.

Israeli, Polish Prime Ministers Agree to Start Talks on Holocaust Law
The new Polish legislation, which still needs approval of the upper house and the president to become a law, forbids any mention of participation of the Polish nation in crimes committed by Nazi Germany during the Holocaust, particularly the use of phrases like "Polish death camps," where millions of people, mostly Jews, were slaughtered by the Nazis.

The bill prescribes up to three years in prison for attempts to link the Polish people with the Nazis' crimes. The bill also bans the denial of the murder of about 100,000 Poles by the Ukrainian Insurgent Army (UPA) during World War II.

Polish officials, including the country’s prime minister, Mateusz Morawiecki, have repeatedly requested corrections when media refer to Nazi death camps as Polish, such as Auschwitz.