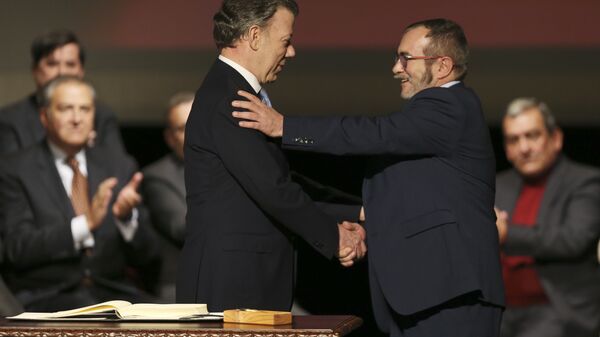 The Revolutionary Armed forces of Colombia or FARC will participate in a presidential race for the first time since the group was founded in the 1960s. Sputnik spoke with Oscar Moreno Martinez, researcher at the University of Edinburgh, to gain insight on how Colombian politics will develop in 2018.

Sputnik: Could a former FARC leader actually be elected president and if not who would be the most likely candidate to do so?

For them, I think that it's not an option, so the reason they are showing themselves as political actors in the electoral way, is for pushing somehow a step further towards peace talks.

I don't think they really have a chance of winning and If they won I don't think it would be a sensible decision for Colombia.

Sputnik: What role does FARC currently play in Colombian politics?

Oscar Moreno Martinez: They do have a role in reconciliation on the one hand and on the other, they have a role in local politics. There are zones in Colombia currently, that support FARC, that's not a secret there is popular support from some areas in Colombia, but they are very local and in specific areas.

I think their role is not in high level politics, but in local areas.

Sputnik: Has the overall situation in Colombia improved since the signing of the FARC peace deal?

Oscar Moreno Martinez: The number of wounded soldiers went down by 97% percent, between 2011 and 2017. That's a huge improvement, we now have less dead people, fewer casualties caused by the war, less wounded soldiers and for now; I think that is enough.

The views and opinions expressed by Oscar Moreno Martinez are those of the speaker and do not necessarily reflect those of Sputnik.