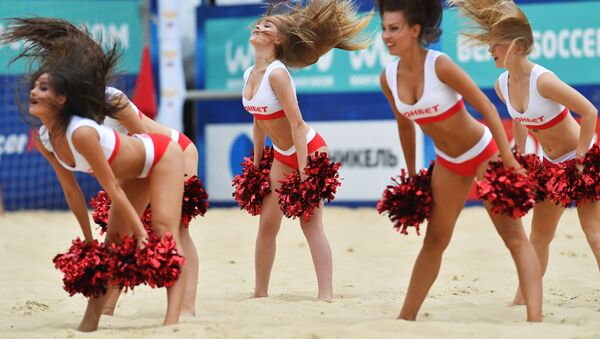 The PDC world darts tournament has scrapped the traditional "walk-on girls" who accompany the players onto the stage at the start of tournaments. Could this be the beginning of the end for boxing ringcard girls and even cheerleaders?

The former world darts champion Raymond Barneveld, from the Netherlands, has launched a petition to get the PDC to change its minds and by Tuesday, January 30, it had almost 32,000 signatures.

Many darts fans have reacted angrily to what some see as the PDC caving into broadcasters who are worried about the public perception of the sport.

Thousands of people have a signed a petition to reverse a ban on walk-on girls. during darts matches. Should they go? pic.twitter.com/JCqi2grRMW

"The girls are part of an institution. Classy and glamorous, they are an integral part of the whole sport. Another f***** PC decision by weak, lettuce leaf handshaking do-gooders. PDC is weak, watch the fans revolt," wrote Simon McLees, on the Change petition.

The walk-on girls will be absent at this weekends' PDC Masters in Milton Keynes, England, and the world number one, Michael van Gerwen, who is also Dutch, welcomed the decision.

But one of the walk-on girls, Charlotte Wood, said the job amounted to 60 percent of her income and she felt her rights were being taken away.

"I have chosen to do this job. I go to work, I put on a nice dress and I escort darts players on to the stage. I smile and that is it. I don't honestly see what the problem is. Where do we stop with this?" Ms. Wood told the BBC.

Do you think darts competition walk-on girls should be banned? 🎯

Holly Combe, a writer for The F-Word, said she felt the PDC had gone about it the wrong way.

"The only thing I would say is damaging and sexist about the walk-on role is that it has traditionally been a gendered thing," she told Sputnik.

"There's nothing wrong with employing good looking people for a specific presentation-related role at an event but it's wrong if this is being done in a way that reinforces traditional gender roles. Why not have walk-on boys as well? After all, some darts viewers like men and would appreciate this and, in turn, I bet some men would be happy to undertake such a role," Ms. Combe told Sputnik.

"It's a shame that people in Charlotte Wood's position have had to lose their jobs when widening out the field would have arguably fixed the problem," Ms. Combe told Sputnik.

Cindy Le, a model who works as a boxing ring card girl, said most of the women would not do it if they felt "uncomfortable".

"I don't find it intimidating because I work as an import model at car shows. I'm used to being around many people. I grew out of being shy," she told Sputnik.

"I think it wouldn't be a problem if there were ring card boys. Men love to look at sexy women so we wouldn't have a problem doing the opposite," said Ms. Le.

"We regularly review all aspects of our events and this move has been made following feedback from our host broadcasters," said a PDC spokesman.

Some boxing, MMA and Formula 1 fans fear political correct "snowflakes" will target their sports next and the feminist lobby may eventually even force NFL and NBA cheerleaders to stop.

"Can someone explain to me how depriving young women of employment is a feminist cause?" tweeted YouTuber Paul Joseph Watson.

"If you don't like it then don't apply and don't watch darts or Formula One. Cowards have once again caved to a noisy minority of permanently offended joyless t****," he added.

"It's a well-paid job. You dress glamorously and obviously it's about being presentable but I never felt I was taken advantage of," she told The Sun.