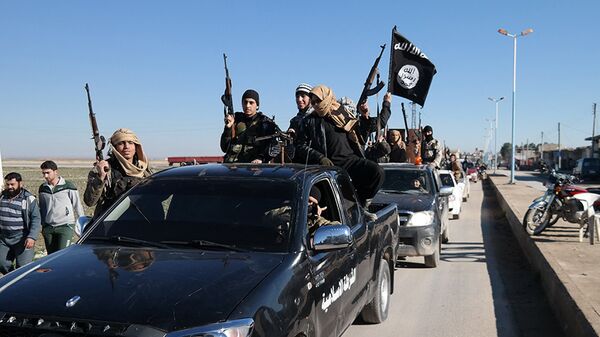 © AP Photo / Militant website
Subscribe
WASHINGTON (Sputnik) - The Desh terrorist group (banned in Russia) has already used chemical weapons in both Syria and Iraq and are planning to use them in future attacks in the West, US Department of Homeland Security (DHS) Secretary Kirstjen Nielsen said in a speech at the Woodrow Wilson Center on Monday.

"ISIS [Daesh] has used chemical weapons on the battlefield in Syria and Iraq… are seeking to develop chemical weapons as well," Nielsen said. "It is only a matter of time before they try to organize these methods into Western attacks."

Nielsen underlined that the Trump administration was going to intensify the vetting of all refugees admitted to the United States from countries with serious terrorist problems.

"I am announcing security upgrades to the… refugees program," she said. "We will be rolling out new security measures for applicants from high risk countries. These changes will help us better assess legitimate refugees."

The official explained that the US government had to do more to keep dangerous individuals out of the United States in the first place.

Despite the US accusations against Russia of alleged covering up chemical weapons use in Syria, Nielsen's stance repeats the concerns voiced by the Russian Foreign Minister Sergei Lavrov on January 18, during a UN Security Council meeting on non-proliferation of nuclear weapons.

Lavrov pointed to a growing threat of 'chemical' terrorism in the Middle East, referring to Iraq and Syria and blaming some countries for turning a blind eye to the growing threat.

Nielsen's statement comes in wake of January 23 Paris meeting of the so-called International Partnership Against Impunity for the Use of Chemical Weapons. Russia and China did not take participate among 24 countries, as they weren't invited. The attendees of the meeting accused Damascus of being responsible for chemical attacks in Syria and Moscow of trying to cover up the alleged crimes of Syrian government troops. Russia has repeatedly refuted the allegations, saying that such accusations are aimed at discrediting the Syrian government.

Supporting this position, the Russian Defense Ministry specified that Washington had ignored the fact that terrorists have been using chemical warfare agents against Syrian government forces and civilians.

000000
Popular comments
They should know, those bastards give them their orders.

Пролетарии всех стран, соединяйтесь!
29 January 2018, 22:39 GMT1
000000
with all the assistance they get from the americans in supply of weapons it sounds like the us will soon be providing these weapons to them...They usually like to boast about it a bit first lets hope they use them to good effect on those who supply them
tonyw247
29 January 2018, 23:24 GMT
000000
Newsfeed
0
New firstOld first
loader
LIVE
Заголовок открываемого материала
Access to the chat has been blocked for violating the rules . You will be able to participate again through:∞. If you do not agree with the blocking, please use the feedback form
The discussion is closed. You can participate in the discussion within 24 hours after the publication of the article.
To participate in the discussion
log in or register
loader
Chats
Заголовок открываемого материала
Worldwide
InternationalEnglishEnglishMundoEspañolSpanish
Europe
DeutschlandDeutschGermanFranceFrançaisFrenchΕλλάδαΕλληνικάGreekItaliaItalianoItalianČeská republikaČeštinaCzechPolskaPolskiPolishСрбиjаСрпскиSerbianLatvijaLatviešuLatvianLietuvaLietuviųLithuanianMoldovaMoldoveneascăMoldavianБеларусьБеларускiBelarusian
Transcaucasia
ԱրմենիաՀայերենArmenianАҧсныАҧсышәалаAbkhazХуссар ИрыстонИронауОssetianსაქართველოქართულიGeorgianAzərbaycanАzərbaycancaAzerbaijani
Middle East
Sputnik عربيArabicArabicTürkiyeTürkçeTurkishSputnik ایرانPersianPersianSputnik افغانستانDariDari
Central Asia
ҚазақстанҚазақ тіліKazakhКыргызстанКыргызчаKyrgyzOʻzbekistonЎзбекчаUzbekТоҷикистонТоҷикӣTajik
East & Southeast Asia
Việt NamTiếng ViệtVietnamese日本日本語Japanese俄罗斯卫星通讯社中文（简体）Chinese (simplified)俄罗斯卫星通讯社中文（繁体）Chinese (traditional)
South America
BrasilPortuguêsPortuguese
NewsfeedBreaking
YesterdayFrance’s FM Says Aware of UK's ‘Permanent Opportunism’, Calls BoJo ‘Fifth Wheel’ in AUKUS
YesterdayMayor of Johannesburg Killed in Car Accident - Reports
YesterdayPython Falls From Rooftop in Australia After House Sheathed From Snakes - Photos
YesterdayWatch: SpaceX Capsule With All-Civilian Crew Splashes Down in Atlantic
YesterdayReport: Iran's Top Nuclear Scientist Was Killed by Weaponized Robot in Long-Planned Operation
YesterdayFour Arrested at Justice for J6 Rally, No Clashes With Counterprotesters
YesterdayAfghan Human Rights Commission Says Unable to Work Due to Taliban Interference
YesterdayFacebook CEO Zuck's Vax Promo Scheme Became 'Cesspool' of Misinformation, Minions Warned
YesterdayUS Air Force Reveals Conditions to Lift Decades-Long Ban on F-22 Raptor Exports
YesterdayOrganiser of 'Justice for J6' Rally in Calls on Protesters to Respect Law Enforcement, Media
YesterdayLion's Den vs Bunch of Kittens: Ex-Trump Press Sec Spicer Sad Because Reporters Treat Psaki Better
YesterdayPolice Bodycam Footage Shows Officer Confronting Armed Suspect
YesterdayUS Man Tells Wacky Story of Russian-Made Mi-17 of 'Secretive Agency' Landing in His Backyard – Video
YesterdayFDA Rejects Pfizer’s Initiative to Offer Booster Jabs After Reports on Vaccine’s Plummeting Efficacy
YesterdayUS Conducts Successful Test of Trident II Missile, Navy Says
YesterdayFrench Foreign Minister Says Paris Had No Prior Discussions on AUKUS, Submarines With US
YesterdayVideo: Hundreds of Illegal Immigrants Stream Across Rio Grande Into US State of Texas
YesterdayPhotos: LA Parents Angered by 'F**k Police', 'F**k Amerikkka' Posters Hung in Classroom
YesterdayLionel Messi’s Contract With Paris Saint-Germain Leaked, Report Says
Yesterday'Cocooning': Biden Team Created a 'Wall' to Guard Him From Unscripted Events, Book Says