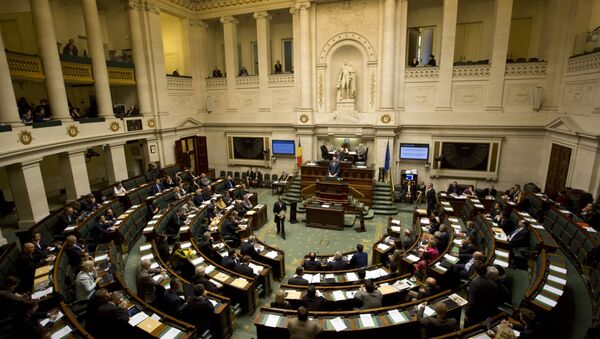 © AP Photo / Virginia Mayo
Subscribe
The bill was introduced a week after the European Union extended its economic sanctions against Russia for six more months, until July 31, 2018.

"We submitted a resolution to the House of Representatives of the Belgian Federal Parliament demanding that our government initiate the European Council's repeal of EU sanctions against Russia," Philip Dewinter, a member of the country's Vlaams Belang party and one of the authors of the document, said.

The new draft was introduced only a week after the European Union, where Brussels plays a key role, has prolonged economic sanctions targeting specific sectors of the Russian economy until 31 July 2018.

However, influential EU figures, such  European Council President Donald Tusk and German Chancellor Angela Merkel, advocated for the prolongation of sanctions at the December 14 EU summit, with Merkel underlining that lifting sanctions "would send the wrong signal" to Russian authorities, according to the EU Observer.

The bloc introduced anti-Russian sanctions after the start of the Ukrainian crisis and Crimea's reunification Russia in spring 2014. Western countries claim Russia has been meddling in Ukrainian internal affairs. Moscow, in its turn, denies this allegation, stressing that the referendum in Crimea was conducted in compliance with international law.

The punitive measures limit Russia's access to EU financial markets and target the country's financial, energy and defense industries. Russia has responded by introducing a food embargo on countries that targeted it with restrictions, warning that the West's sanctions are counterproductive.

Since the introduction of the sanctions, the EU has been prolonging them every six months. Brussels has linked the lifting of sanctions to the implementation of the 2015 Minsk Agreements that stipulate the ceasefire in Eastern Ukraine and withdrawal of equipment from the frontline.

The cessation of hostilities, however, has been repeatedly breached, with Ukrainian government forces and Donbass militias accusing each other of violating it. Russian president Vladimir Putin has said that the efficiency of the Minsk Accords is "low because of the unconstructive position of the representatives of today's Kiev authorities."

000000
Popular comments
Let us hope they make the right choice & repeal those sanctions, at least for their own sake.