'It's a Trap!': Gamers Enraged By New Hardcore Game 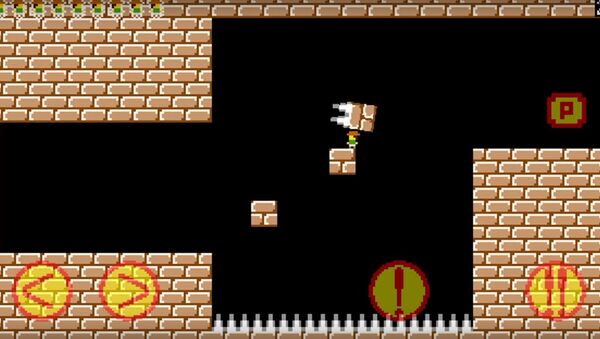 A hilariously difficult 2-year-old arcade platformer for iOS recently received a wave of mass attention and made it to the top of the charts in AppStore, despite highly irritating gameplay.

Trap Adventure 2 was released back in 2016, but it has drawn the attention of a public just recently, after video walkthroughs of this game started to appear on YouTube gaining up to 1.5m views.

It is a classic Super Mario-style arcade platformer where a player has to pass a series of levels filled with deadly traps. But there is a catch – you never really know where the safe ground on any level is, because anything in this game may turn out to be another trap.

Platforms that normally (as in classic platformers) serve as means to pass traps filled with spikes turn out to be just as deadly as the traps themselves. And even if you manage to recognize this in time and react… the game takes another twist, turning places previously proven to be safe against you. Even the end of the level isn’t 100% safe.

Just take a look at the very first level:

Twitter users, impressed and even shocked by the game’s difficulty, express different opinions towards it, with some warning it may cause bursts of uncontrolled anger:

This game is stupid as fuck and it’s pissing me off #TrapAdventure2 pic.twitter.com/mrs5Qfbq1Y

… and some comparing it with their own real life situations:

Pretty much sums up what the #pursuitofexcellence looks like: Right this way… Take that… Deal with this + that… Think you've made it?! Think again! You’re on 🔥! Not so quick. Beat it💨. Made it. No you didn’t… Try, try again.

I've had entire relationships that were basically Trap Adventure 2 carried out by other means. https://t.co/aGfQJ4PR6L

This is not the first time hardcore mobile games earn the “love” of the public. Flappy Bird – an iOS game (later released for Android) made it to the top of the charts in January 2014. In the game, a player has to guide a little bird through an endless series of obstructions.

Despite its simple mechanics, the game itself was hard to beat. It infuriated many players so much that they started threatening the author of Flappy Bird. Consequently, the author decided to discontinue the game and removed it from the AppStore and Google Play Store. Its place was taken by numerous clones that also gained their share of popularity.