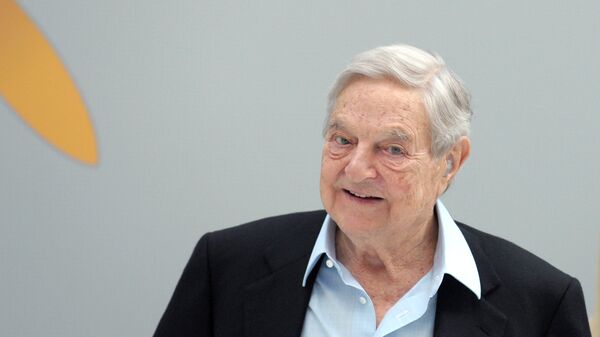 Sputnik: Does it come as a surprise that George Soros used the World Economic Forum to have a go at the US president?

Thomas Whalen: I’m surprised by his tone, I thought he’d be a little bit more discrete and subtle but no, he unloaded both barrels there, he didn’t hold anything back.

Sputnik: At the forum, Mr. Soros said that he expects a win by the Democrats at the 2018 mid-term elections and called president Trump "a temporary phenomenon," what are your thoughts on that? Do you think that Donald Trump has a chance on winning a second term if he chooses to run again?

Thomas Whalen: Well, I mean, I think it's far too early to speculate on whether Trump and win or not but I mean, you certainly can't count him out at this point, especially given the Democratic Party is really factionalized at this point and you know, at this point it looks like in 2020 there might even be an independent third party candidate which would allow someone like Trump who kind of holds around 35, 45 percent of the electorate, could kind of slide in there, you know, with a plurality so I mean, I think Trump is still a formidable candidate for 2020 for re-election.

Thomas Whalen: Generally the economy is humming along fine, you know, the question is do you attribute it to Trump or to his predecessor cause it had also been building up ahead of steam when Obama just before he left office, so I think that Trump's tax-cut policies, will provide, at least in the short-term something of a boost and that might provide even more jobs but the problem here in the United States is what kind of jobs are they?

Because, overall income inequality is growing, it’s a giant chasm between the haves and the have-nots here so, a lot of these jobs being created are primarily in the service sector and they’re not exactly good paying jobs and it’s getting increasingly hard for working class and lower class Americans, you know, to provide for themselves, their families and you know, provide adequate shelter and food for themselves.

So I mean, the proof is in the pudding here and can Trump raise the standard of living? And you know, right now that’s a big question. It’s interesting that the age for white people now, is actually in decline, the average age so that’s never before happened in modern American times.

Sputnik: What do you mean? Average age of what? In terms of what? Can you just clarify that?

Thomas Whalen: In terms of their extent of their lives, the average used to be in the 70s, now it’s like a slight slip downward, people, and this is due according to resources, it could be suicide, drug abuse, alcohol abuse so I mean it’s interesting, that you have that supposedly in a time of prosperity, so much despair that it would impact how long someone would live.

Sputnik: Is Soros' previously falsely forecast that the US president would crash the economy and some critics have already dubbed his recent predictions as "dire." What’s your particular take on that, Thomas?

Thomas Whalen: He's playing with fire here because what he's advocating here is a protectionist approach and the world economy since World War II which was built by the United States, I might add, is an interconnected globalized marketplace and it puts an emphasis on free trade. You lower tariff barriers among all nations, you minimize the restrictions of trade and he is talking about erecting barriers, putting in more restriction and that might be the bug in the system that might cause the whole thing to crash and I think that should be of concern to all world leaders.

Sputnik: What's your general take  on this "America First" campaign and the policy? Are you a pro-America First kind of guy? Do you believe in that strategy? Is that beneficial for the US?

World
Donald Trump's Speech at Davos: From 'America First' to 'Fake News'
Thomas Whalen: No I'm not particularly so. I think he has to have a broader perspective, the world’s gotten a lot more complex, this is not the 19th century anymore. No I think Trump, he seems to be captivated by the gilded age of the 19th century, "Bring America back to the good old days," but the world is a lot different than it was in those days and you have to adjust accordingly and I think a lot of the jobs that he’s talking about that he’s going to restore are never going to come back and the greatest threat is not necessarily foreign trade partners, the greatest threat is AI and automation.

In the next 20 years, we’re going to lose, everywhere in the world, a lot of jobs and I think a lot of economists are scratching their heads, "Well how are people, regular people going to get employed?" I think it lends credence, particularly on the Democratic side and left-leaning side, this is something I was brought up actually during the Richard Nixon administration, a guaranteed family income or individual income because you’re going to need people spending in the economy. Governments are going to have to literally cut checks for people.

Thomas Whalen: And Soros I think is right on that, and Bitcoin is not regulated, this kind of, god knows what can happen, it can go up a lot but it can also crash. I’d be a little leery about Bitcoin at this point.

Sputnik: Mr. Soros also compared Facebook and Twitter to gambling companies, why is he taking such a tough stance on social media companies? Is he right in terms of their power and the fact that they’re not regulated and the effect that Facebook and Twitter is having on the global community on the whole?

Thomas Whalen: I think that's fair and I think Soros is also thinking about the 2016 presidential election, the impact that those organizations had on it. I think that a lot of people in the United States, they want greater transparency and these are big behemoths, nobody seems to know what they're up to, what their agendas are and I think they want to shine a brighter light on them.

The views and opinions expressed by Thomas Whalen are those of the speaker and do not necessarily reflect those of Sputnik.