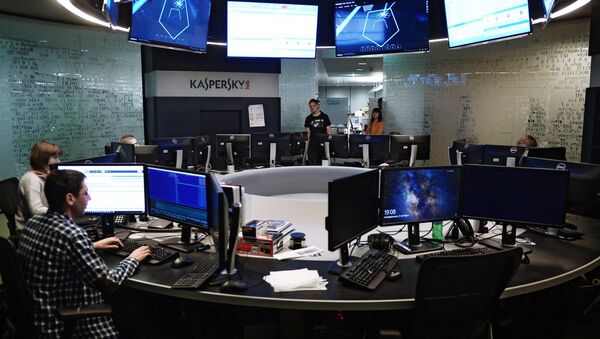 © Sputnik / Kirill Kallinikov
/
Go to the photo bank
Subscribe
Shunning Kaspersky products will not lead to more safety, according to a report published by the Times. In the report, the author states that countries with high-end cyber capabilities have plenty of means to break into almost any computer. Radio Sputnik spoke with Professor Marc Gregory about the issue.

In his interview with Sputnik, he said that over the last 20 years it has been seen that the operating systems and software products from a range of companies, and hardware which includes software products, have all been susceptible to a phenomenon where organizations are spending billions of dollars trying to find ways to access systems to eliminate weaknesses in software products.

“The biggest problem that we have with computers today is that the companies that make the operating systems didn’t take on the responsibility for security at the beginning,” Gregory said.

According to the professor, that is the reason why there is today a “second tier of software” that’s been developed over the last twenty years, that has anti-virus and anti-malware software in it.

Talking about how the US government has been accusing Kaspersky products of enabling alleged Russian espionage, the professor said that the government is applying a similar technique to the one it applied to Chinese software products and it is trying to push the product out of the country.

Bitcoin is a 'Project of US Intelligence,' Kaspersky Lab Co-Founder Claims
However, he said that it is vital to keep in mind that the leaks of documents that occurred through WikiLeaks highlights that “US companies especially in the networking engineering space were providing backdoors into key devices and these were American companies that were providing backdoors to the NSA and from the Australian perspective that was a shocking revelation,” Gregory said.

He went on to say that this reveals that no country is free from interference from government and security agencies.

Last year, the US government banned all departments from using Kaspersky products, even though the firm repeatedly denied all allegations that its software could enable Russian espionage.

The report recently published by the Times stated that countries with high-end cyber capabilities have plenty of means to break into almost any computer.

Moreover, it was noted that despite allegations that the company transferred data to its headquarters, the work of Kaspersky Lab’s antivirus software is similar to its competitors.

000000
Popular comments
Not that I believe the accusations against Kapersky for one nanosecond, but to be honest hiding malicious code inside security/anti-virus software would be very effective and ingenious means to infiltrate systems. Obviously the software users trust to find breaches is not going to determine code/scripts/etc that are part of the security package to be a threat. Although I have no evidence to support this, it would not surprise me if Norton products had some time of NSA back doors in it.