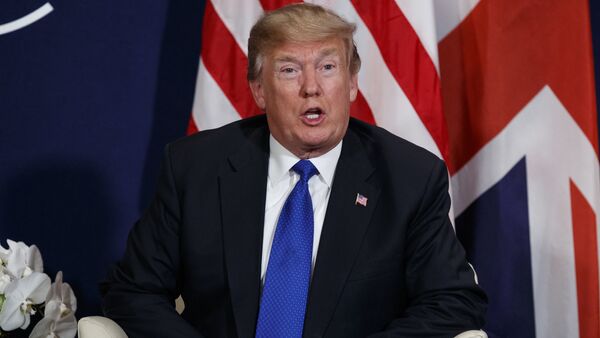 © AP Photo / Evan Vucci
Subscribe
Trump said that he was the "least racist person that anybody's going to meet" and that his retweet was not an endorsement.

In an interview with ITV, US President Donald Trump said that he would apologize for sharing videos originally posted by a leader of a UK far-right group if asked to.

The president, who came under criticism in the UK, with Prime Minister Theresa May also voicing concern over the repost, said, "Here’s what’s fair, if you’re telling me they’re horrible people, horrible racist people I would certainly apologize if you would like me to do that."

ITV host accused Trump of causing "huge anxiety and anger in my country, because Britain First is basically a bunch of racists, fascists," prompting the US president's response that "of course" he didn't know that.

He explained that he knows "nothing" about Britain First, "I know nothing about them today, other than I read a little bit."

"Certainly I wasn't endorsing anybody. Perhaps it was a big story in the UK, but in the United States it wasn't a big story. I am the least racist person that anybody is going to meet," he added.

Account of Right-Wing British Leader Retweeted by Trump Suspended - Twitter
In November, Trump came under fire for retweeting videos originally published by Jayda Fransen, the deputy leader of the UK's far-right Britain First movement. Fransen claimed the videos showed an Islamist gang beating a teenage boy to death, a Muslim destroying a Christian statue, and a Muslim migrant beating a Dutch boy on crutches. Trump's retweets provoked criticism from many in the UK, as well as US politicians and public figures.

Asked about Trump's Twitter posts, White House spokeswoman Sarah Sanders said the threat depicted in the videos was real, even if the videos themselves could not be verified. Sanders said by reposting the videos, Trump aimed at promoting strong border security and national security.

Office of Theresa May has described the retweets as "wrong."

000000
Popular comments
Oh I get it! Sarc! Any political party that does not endorse mass immigration of those cultures that do not fit in and takes to warning their own kind of the many problems that some cultures bring with them, a rise in criminality, assaults, robberies and murders, among those problems, must be labelled 'far right' as if being 'far right' brings problems that are even worse than those who have through their mass immigration made Britain a very unsafe place. Trump was right to re-tweet what he did. He knows that May will never seek an apology for something that she, herself, has been assisting in covering up in her own country and against her own people!
terryjohnodgers
26 January 2018, 10:44 GMT
000000
Newsfeed
0
New firstOld first
loader
LIVE
Заголовок открываемого материала
Access to the chat has been blocked for violating the rules . You will be able to participate again through:∞. If you do not agree with the blocking, please use the feedback form
The discussion is closed. You can participate in the discussion within 24 hours after the publication of the article.
To participate in the discussion
log in or register
loader
Chats
Заголовок открываемого материала
Worldwide
InternationalEnglishEnglishMundoEspañolSpanish
Europe
DeutschlandDeutschGermanFranceFrançaisFrenchΕλλάδαΕλληνικάGreekItaliaItalianoItalianČeská republikaČeštinaCzechPolskaPolskiPolishСрбиjаСрпскиSerbianLatvijaLatviešuLatvianLietuvaLietuviųLithuanianMoldovaMoldoveneascăMoldavianБеларусьБеларускiBelarusian
Transcaucasia
ԱրմենիաՀայերենArmenianАҧсныАҧсышәалаAbkhazХуссар ИрыстонИронауОssetianსაქართველოქართულიGeorgianAzərbaycanАzərbaycancaAzerbaijani
Middle East
Sputnik عربيArabicArabicTürkiyeTürkçeTurkishSputnik ایرانPersianPersianSputnik افغانستانDariDari
Central Asia
ҚазақстанҚазақ тіліKazakhКыргызстанКыргызчаKyrgyzOʻzbekistonЎзбекчаUzbekТоҷикистонТоҷикӣTajik
East & Southeast Asia
Việt NamTiếng ViệtVietnamese日本日本語Japanese俄罗斯卫星通讯社中文（简体）Chinese (simplified)俄罗斯卫星通讯社中文（繁体）Chinese (traditional)
South America
BrasilPortuguêsPortuguese
NewsfeedBreaking
15:08 GMTParis Being Rocked by Protests Against COVID-19 Passes for 10th Weekend in Row
14:31 GMTNotre-Dame Restorers Finish Fortification Works to Start Restoration Phase
14:19 GMTWhen Trump Asked Obama About His 'Biggest Mistake', POTUS 44 'Couldn't Think of Anything': Book
14:05 GMTFrance 'Raises Game' on Migrant Interceptions After UK Threatens to Scrap Funding to Paris
14:00 GMTFour British Ex-PMs Snub Johnson's Chequers Centenary Banquet
13:58 GMTAir Defence Strengthened in Northern Ukraine as Part of Exercises With NATO, Air Command Says
13:54 GMTSenior Dies From Self-Inflicted Wounds at Medics' Protest in Warsaw
13:53 GMTGuinean Military Says Ousted President Conde to Remain in Country
13:30 GMTElon Musk Says Future SpaceX Ships Will Have Food Warmers After Inspiration4 Mentions Cold Pizza
13:22 GMTEx-Sec of State Pompeo, NSA O'Brien Knew Nothing About Gen. Milley's Secret Talks With China: Report
13:13 GMTParisians Protest Against COVID-19 Health Pass, Mandatory Vaccinations
13:03 GMTLive Updates: Trump Supporters Gather for 'Justice for J6' Rally Near US Capitol
13:03 GMTK-Pop Sensation BTS Turns Celebrity Diplomats, Will Represent South Korea at the UN General Assembly
12:59 GMTPolice Scrap Request for 100 Armed National Guardsmen to Tackle Pro-Capitol Riot Rally
12:16 GMTFrench Ambassador Accuses Australia of Betrayal Before Leaving for Paris
12:10 GMT'Why Would US Ensure Our Defence?' France Urges EU to Boost 'Strategic Autonomy' Amid AUKUS Fallout
12:03 GMTDonald Trump Called North Korean Leader Kim Jong-un 'F**king Lunatic', New Book Claims
11:55 GMTVideo: Protesters in Greece Burn US, NATO Flags as Alliance Holds Annual Meeting
11:44 GMTTroy Deeney on Ronaldo's 'Magic Diet': 'If I Saw Him Eating Horsesh*t... I'd Eat That Too!'
11:39 GMTPentagon Warns Europe of Russia Posing Bigger Security Threat Than China