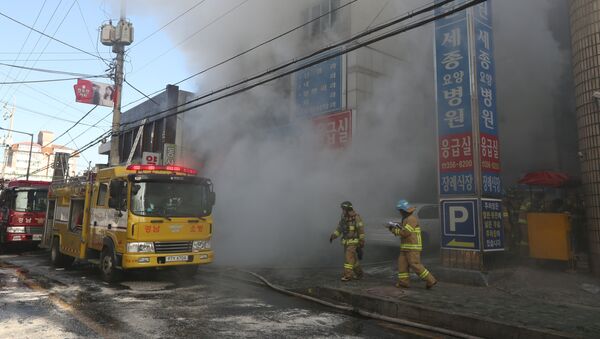 MOSCOW (Sputnik) - A blaze at a hospital in the South Korean city of Milyang early on Friday killed 41 people and injured 79, country's president has called an emergency meeting.

Authorities said most of the casualties were patients, according to the Yonhap news agency. Thirty-eight injured people were being treated at nearby clinics.

According to local media, the death toll from the devastating fire has gone up to 41.

The injured toll has also risen from 40 to 79 with 9 of them in critical condition, Yonhap reported.

Over 50 Killed in Passenger Bus Fire in Kazakhstan - Reports (VIDEO, PHOTO)
Earlier, Yonhap reported 8 people dead and 40 injured in the blaze. Reuters has quoted a fire station official earlier as saying that the situation was developing quickly and the death toll was expected to rise further.

A hundred patients were believed to have been trapped inside the burning building, the outlet said, with more than 90 residents of an adjoining nursing home evacuated right away.

Authorities reported that the fire suspected to have started in the emergency room of the main building of Sejong hospital.