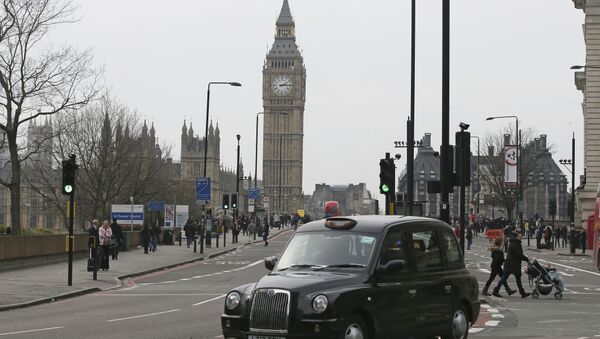 The Russian Defense Ministry described Friday the claims of UK’s new Defense Secretary Gavin Williamson that a potential Russian "attack" on the nation’s critical infrastructure could kill thousand as "beyond common sense."

"The head of the UK Defense Ministry has gone beyond any sense in his fiery fight for the defense budget increase," spokesman of the Russian Defense ministry Maj. Gen. Igor Konashenkov said.

"Just for the record, all information about the locations of British electric power plants and pipelines is as 'secret' as photos or the location of the Westminster Abbey or Big Ben," Konashenkov added.

According to the spokesman, Williamson is not the first UK minister of defense, who is trying to gain political points by frightening Britains by an alleged Russian threat.

The top minister told the Telegraph earlier that Moscow was researching the UK's infrastructure connections to energy supplies for opportunities to create "chaos."

"Why would they keep photographing and looking at power stations, why are they looking at the interconnectors that bring so much electricity and so much energy into our country," the minister said.

The statement of UK's top official comes just days after the call of UK Chief of General Staff Gen. Nick Carter to increase military spending to keep up with "UK adversaries," such as Russia, North Korea, Iran and China, to protect the country from hybrid warfare allegedly practiced by these hostile states.

Meanwhile, the Russian embassy in the United Kingdom noted on Friday the growth of London's "aggressive rhetoric" toward Moscow.

"We are concerned about the growth of aggressive rhetoric spread by UK officials in relation to Russia. The latest examples confirming this dangerous tendency are the words of Gavin Williamson. The question is what the purpose of such statements is and whether the UK side understands their true price," the spokesman for the embassy said in a statement.

Russia, already accused of meddling in the 2016 US presidential election, has also been fiercely criticized by UK Prime Minister Theresa May for "weaponizing information," claiming that Russian state-run media was used to "plant fake stories" in order to "sow discord in the West." She accused Russia of interfering in foreign elections, citing cases of alleged Russian hacking of the Danish Defense Ministry and German parliament.

UK Army Chief's Talk of Russian Military Threat is a 'Smokescreen' – Analyst
The Russian Foreign Ministry has called May's accusations "irresponsible and groundless," noting that the United Kingdom was also seeking global leadership on the issue of deterring Russia.

Kremlin spokesman Dmitry Peskov, in his turn, has dismissed claims of Russian interference in the Brexit vote, saying that such allegations were illustrative of a lack of professionalism among politicians, who were trying to replace the absence of real action or political success with such claims.

In addition to fake news allegations, Moscow was accused by Ciaran Martin, the chief executive of National Cyber Security Centre (NCSC), in November of attacking the UK power supply on the day of the parliamentary election. In December, the NCSC said it had identified 100 hacking groups, most of which were allegedly funded by Russia, China, North Korea and Iran, that had attempted to steal sensitive information.

000000
Popular comments
North Korea or the German Regime "the European Union" are the 2 greatest threats to the UK. Russia is not a threat to the UK