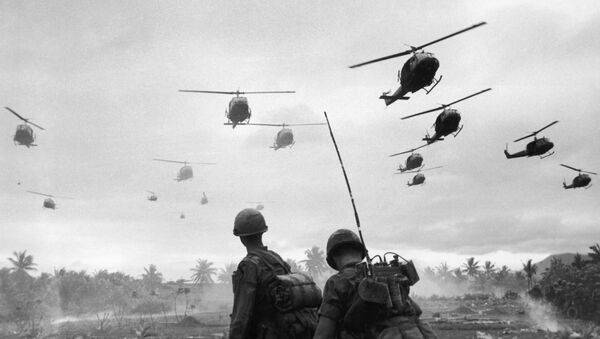 For the first time since hostilities between the US and Vietnam concluded in 1975, an American military vessel will be making a port visit to the Southeast Asian nation. The aircraft carrier visit, planned for March, is a sign of emboldened ties between the bitter Cold War rival nations.

The visit to the city of Da Nang was announced on Thursday by US Defense Secretary James Mattis during his first visit to Hanoi. The retired Marine Corps general and his counterpart, Minister of National Defense Ngo Xuan Lich, said that they discussed such a visit during a closed-door meeting.

"Thank you for the increasing partnership with our aircraft carrier coming in to Da Nang here in March," Mattis said to Communist Party General Secretary Nguyen Phu Trong, whose power is generally considered to eclipse that of President Tran Dai Quang.

"From postwar legacy issues to what Minister Ngo called the positive trajectory of our military-to-military relations, I'm confident we're on the right trajectory, sir," Mattis added as he and the president sat underneath a large bust of revolutionary leader Ho Chi Minh, who led the communist opposition to the US incursion in the earlier years of the war.

Mattis did not ignore the bloody history of the two nations, but instead pushed to move past wars of previous generations. "We recognize that relationships never stay the same. They either get stronger or they get weaker, and America wants a stronger relationship with a stronger Vietnam," Mattis told Ngo.

Ngo added in a statement of his own that such a visit had been in the pipeline since mid-2017, during a previous meeting he held with Mattis at the Pentagon. As a gesture of peace, they added, they gave Mattis "war artifacts of US military personnel in the war."

Mattis joined the Marines as a young man in 1969, but he was never deployed to fight in Vietnam.

The defense secretary also took a break from meeting with Vietnamese leaders to visit the Tran Quoc Buddhist pagoda, built on a small island in Hanoi in the sixth century AD. Mattis looked out at the water and spoke at length with one of the temple's senior monks.

"Beautiful," Mattis reportedly remarked. "Peaceful. It makes you think more deeply." The temple is in clear view of the museum that stands over what was once Hoa Lo Prison, better known in the West as the "Hanoi Hotel," where American prisoners of war were held.

The legacy of the war, which left between 1 and 3 million Vietnamese people dead and inflicted untold devastation on the southeast Asian nation, is impossible to escape completely — no matter what geopolitical shifts occur. But the enemy of an enemy is a friend, and the US and Vietnam now have the same rival: China.

In 1979, China and Vietnam became embroiled in a border war in response to Vietnam's successful invasion of Cambodia and decapitation of the infamous, Beijing-backed Khmer Rouge. Vietnam repelled the Chinese attack, although much of the capital of Hanoi was destroyed and the two nations engaged in frequent border skirmishes until 1990.

The two Asian nations are also embroiled in a land dispute over the Paracel and Spratly Islands in the South China Sea, with China and Vietnam even skirmishing over the islands in 1988.

Chinese Assistant Foreign Minister Chen Xiaodong said in November that China and Vietnam had hashed out a peaceful resolution to the dispute and will continue to communicate to address any future conflicts. However, Chinese land reclamation activities continue on both island chains.

Vietnam has also embraced the strict sanctions brought against North Korea, a severely sanctioned nation that trades mainly with China.