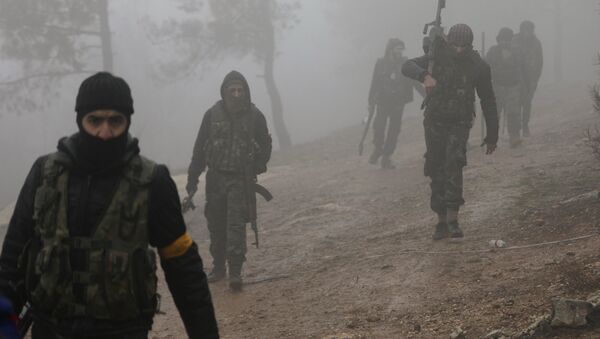 Ankara's operation Olive Branch against Kurdish groups considered as terrorists by Turkey has entered its sixth day, with the Turkish prime minister stating that the offensive is aimed at protecting not only the country's borders, but also providing security for the whole Europe.

More than 300 terrorists had been killed since the beginning of the operation in Syria's Afrin, Turkish Prime Minister Binali Yildirim said on Thursday.

The minister stressed that the offensive is carried out within the framework of the law and aimed at protecting not only the Turkish borders, but also Europe as a whole.

"We will not allow the creation of any terrorist corridor," —  Yildirim added.

Turkish President Recep Tayyip Erdogan arrived on Thursday in the southern province of Hatay on the border with Syria to conduct an inspection of the Turkish military contingent deployed there to participate in a military operation in Syria, Turkey's NTV television reported. According to NTV, Erdogan visited the headquarters of the operation and received reports from military commanders.

Binali Yildirim also called unacceptable the situation where "one NATO member state protects its borders from a terrorist threat, while another NATO member supplies terrorists with weapons," referring to the military assistance provided by the United States to the Kurdish militias in Syria.

Turkish Media Exposes Alleged Kurdish Fake News Crusade to Smear Afrin Op
Tensions between the two countries has been running high in the wake of the US announcement that Washington is going to train a new border force consisting of the Syrian Democratic Forces (SDF), Kurdish groups dominated by the People's Protection Units (YPG), which Ankara regards as terrorists. The US move prompted Ankara to start an operation dubbed Olive Branch aimed at eliminating terrorists and preventing the formation of a terrorist corridor at its borders with Syria.

As for the losses, Turkey's General Staff announced Wednesday that according to its estimates, total of 287 terrorists were killed in the first four days of the operation, a claim refuted bu the YPG militia representative telling Sputnik that no more than 15-20 Kurdish militiamen had been killed. An SDF representative speaking to Reuters said that militia had caused dozens of casualties among Turkish and allied Free Syrian Army militia since the start of the fighting.

Ankara Believes Too Early to Discuss US Proposal on Security Zone in Syria
In addition, Afrin region's health department told Kurdish news agency Hawar that civilian casualties amid the operation had climbed to 35 amid Turkish shelling of populated areas, with more than 100 others sent to hospital. However, Turkey stated that its Armed Forces only target militants, whereas securing lives of civilians is one of the operation's priorities. On the Turkish side, the governor of Kilis, a city near Turkey's border with Syria, said that two civilians had died in hospital after a missile attack fired from Afrin hit a local mosque. At least eight people were wounded in that attack.

The Kurdish enclave in Syria’s Afrin has been the apple of discord between the US and Turkey ever since the beginning of Syria’s civil war. The US views the YPG units as effective force in fighting Daesh in the region thus providing weapons and training support for them. Ankara in its turn considers the YPG fighters as a terrorist group, since it suspects the militia of ties with the Kurdistan Worker's Party (PKK) banned in Turkey as it has been waging an armed conflict in the country trying to gain autonomy and equal rights for Kurds living in Turkey.