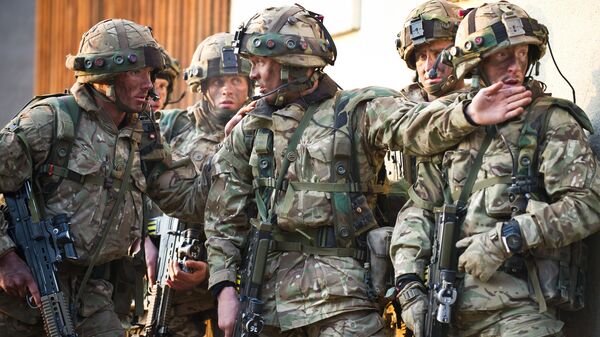 Sputnik: One question about the timing of this statement [about Britain's armed forces risk of falling behind Russia]. Why is General Nick Carter making it now?

Charles Shoebridge: Especially we've seen Russia used, if you like, almost as a whipping boy. We know this anyway in the Western media, amongst Western politicians and some of them.

But also it is a useful tool to argue for an external threat and of course that can justify spending of resources. We’ve also seen, of course, the threat of terrorism being used in a similar way repeatedly to increase the powers of domestic intelligence agencies and police forces and their funding too.

But this isn't just about a competition between different departments, shall we say, whether money should be spent on a health or education or on the armed forces; it is also, there is struggle of course within the armed forces itself as to where money should be spent and this general is the head of the army rather than the head of the armed forces as a whole and therefore one can expect, especially a time when these budgets are looking to be more severely constrained, that he [Carter] will be fighting to say that it's the army that is falling behind, but he has a point with that.

To some degree the British military, particularly the army, is at a very low ebb in terms of its numbers, it’s possibly smaller than it has been for hundreds of years. But also the state of its equipment, much of it is out of date and much of it doesn't work properly, but at the end of the day a lot of that is down to choices made by the British defense establishment themselves.

They've chosen to invest heavily in capital projects such as the Trident Missile Submarine Program, such as the two aircraft carriers Britain has now got either in service or shortly coming into service and that are currently being constructed. These are highly expensive projects and of course the money has to come from somewhere and it has come largely from the resources that otherwise would have gone to the army.

Sputnik: How big are the cuts that the British Armed Forces are potentially facing?

Charles Shoebridge: […]Well they’re worried of course that they’ve already been cut to the bone and indeed, each successive spending review has reduced yet further the manpower, if we’re allowed to say that, or personnel power and the equipment budget and of course the maintenance budget for the military, in particular for the army.

Of course it’s got to be remembered that in respect to this, although it’s useful to cite the Russian threat and it’s interesting as well in that capacity, he mentioned that Russia is no longer thousands of miles away as a threat, it's now on Russia's borders; I found that quite interesting that he said that because Russia has not moved over the years, but what has moved that's brought it closer to, so-called, Europe's borders is the eastward expansion of NATO.

Britain already spends far more than Russia does per capita on defense spending.

Britain also spends far more in absolute terms than any other European nation, for example more than Germany with a much bigger population.

Sputnik: General Carter said that the British Army's ability to respond to threats will be eroded if Britain doesn’t keep up with its adversaries. Why are we still using Russia as an adversary?

Charles Shoebridge: […] He [Carter] is ambitious and outspoken and he never wastes an opportunity to talk up the threat from Russia, North Korea, Iran and other perceived enemies of the UK, by which normally is meant countries that don’t agree with everything that the West, particularly Britain and America, does.

The views and opinions expressed by Charles Shoebridge are those of the analyst and do not necessarily reflect those of Sputnik.