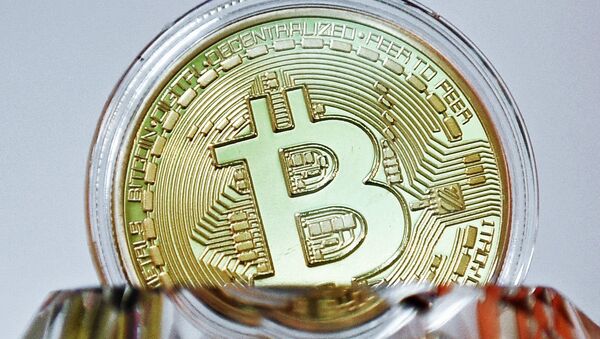 © Sputnik / Vladimir Astapkovich
/
Go to the photo bank
Subscribe
Manu Prashant Wig, Director, Blue Fox Motion Pictures Limited which recently launched its own cryptocurrency named bfx coin (BFXC) in India spoke to Sputnik about why virtual currencies are here to stay despite efforts by governments to clip their wings.

READ MORE: India Equates Bitcoin to Ponzi Schemes While Shying Away From Banning Them

Manu Prashant Wig, Director, Blue Fox Motion Pictures, says plans are afoot to seek legal approval for its cryptocurrency and ability to pay taxes on it.

Sputnik: The Indian government and regulators have long been warning citizens about the risks involved in cryptocurrencies. Despite the repeated warnings, what according to you could be the reason behind Indians continuing to invest in virtual currencies?

Manu Prashant Wig: The concept of virtual currencies in India has gone viral only from the past 12 months. The government though has been warning citizens to be cautious, they have neither banned it nor have they included the Virtual Currencies (VCs) in a tax slab, which inadvertently will happen in a few months (by bringing exchanges under a regulatory). The VC's in the past 2 years have shown exceptional growth and easy redemption options which have lured not just Indians, but people across the globe to take possession of various VC's at various levels. In India, the market is still in the nascent stage.

Sputnik: The Indian government has termed VC's as a Ponzi scheme. However, BFX coin has raised more than $45 million. What do you have to say about this?

Manu Prashant Wig: The Government has never termed VC's as a Ponzi scheme, yes they have warned people against Ponzi schemes that are running under the umbrella of VC's. For that case, they have always warned the public against any Ponzi scheme, which in fact, is correct. As far as raising $45 million is concerned, BFXc has raised $15 million ($30 million has been pledged into the system by BFXc to create an asset base. Whatever has been raised has been done only against other VC's (BTC / ETH) or an internally closed wallet. Most of our investment has been done towards projects in India (which will generate taxes for the government) and abroad via mining activities and other production based setups, something to add value/asset base to the BFXc.

Sputnik: Do you expect the Indian government to legally recognize VC's in the near future? If yes, what makes you think so?

Manu Prashant Wig: I hope they do so. The market is growing and being decentralized, tracking this fully is impossible. The government needs to regulate this as banning it will not help. I feel that the government is losing an annual revenue of more than $1 billion by not regulating or taking the VC under the tax purview.

Sputnik: Would you prefer to venture into the Bitcoin mining business? If yes, what kind of preparations are you making?

Manu Prashant Wig: BFX Cryptoworks Ltd. London, UK has already done that with setups (individually / partnership) coming up in India, Dubai, Australia and Cyprus. We are keen on mining of other than the BTC. Yes with an experienced team of technical experts we are looking at the hard forks of major alt coins in near future.

The views and opinions expressed by Manu Prashant Wig in this article are those of the speaker and do not necessarily reflect the position of Sputnik.