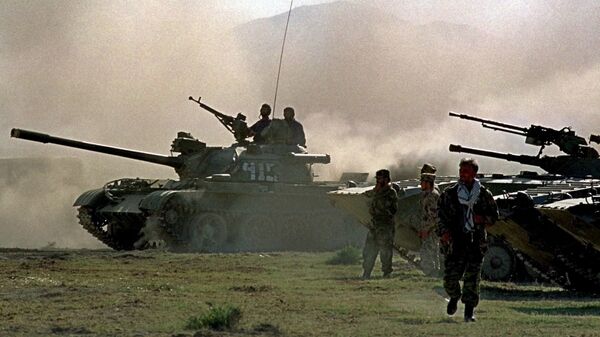 The Chinese Foreign Ministry dismissed the notion that the People’s Liberation Army is establishing a new base near the Afghanistan-Tajikistan border on Thursday.

Reports of China building a base in Afghanistan seem to have come from a misreading of a Central Asian news report that Beijing will help fund a base for the Afghan Army.

On January 4, Ferghana News Agency published a report indicating that the Afghan Armed Forces would construct a military base in the northeastern Afghan province of Badakhshan with Beijing's financial support, citing Afghan Gen. Dawlat Waziri.

An Afghan Defense Ministry source informed the news outlet that China was concerned about Uighurs training with terrorist groups like Daesh or the Taliban and then returning to China to carry out acts of terror. "The Chinese side fears that the Chinese Uighurs, who are among the terrorists now, can cross the territory of China through Afghanistan and make problems for the Chinese authorities," the unnamed official said.

Chinese authorities have struggled to overcome "the three evils" of extremism, separatism and terrorism presented by Uighurs determined to resist Chinese rule. Since mid-2015, China has been in a higher terror alert following a tenfold increase in the number of "trained jihadist fighters" caught trying to enter China, the South China Morning Post reports.

According to the Ferghana News report, "the Chinese side covers all material and technical expenses for this base — weapons, uniforms for soldiers, military equipment and everything else necessary for its functioning."

On January 25, the Chinese Foreign Ministry did not specifically address whether or not Chinese funds would be used for a new base in Afghanistan, but spokesman Wu Qian did express that "the so-called issue that China is building a military base in Afghanistan is baseless."

According to the Diplomat, "Ferghana News reported that China will build a military base in the northern province of Afghanistan," implying the People's Liberation Army would be setting up shop in Afghanistan with Kabul's approval. In fact, the Fergana report states that China will fund the base's construction and that it would be manned by the Afghan Armed Forces.

Central Asia isn't the only place China is expanding its military presence and influence. In 2017, the People's Liberation Army-Navy opened its first overseas base on the Horn of Africa in Djibouti. The Pentagon believes China will pursue the establishment of more military bases with countries it historically shares friendly relations with, like Pakistan.

One of the locations for another PLA-N base that has been discussed is Gwadar in the southern province of Balochistan, which marks an important trading spot for the China-Pakistan Economic Corridor. Beijing has poured $248 million into construction efforts at the once-dilapidated Gwadar trading port, according to the Gwadar Port Authority. At the start of the month, Pakistan's Foreign Office dismissed discussion of a Chinese military base at Gwadar as "propaganda."