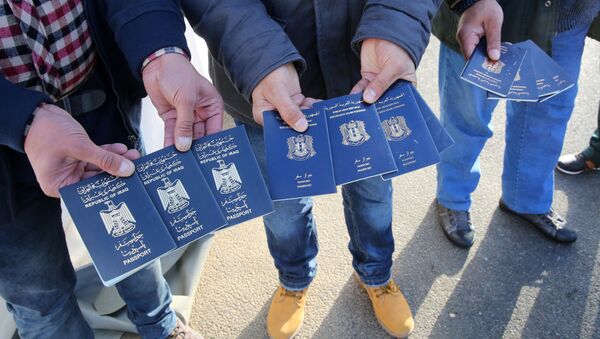 © AFP 2021 / DPA / BERND WUESTNECK
Subscribe
In Sweden, war crimes are handled by a special police commission, which saw a drastic surge in suspected war criminals, the newspaper Svenska Dagbladet reported. In 2014, it received 12 notifications from the Swedish Migration Board; this number jumped to 52 in 2017. By contrast, the number of convictions remains low.

The number of individuals suspected of war crimes in Sweden has doubled in the past two years amid ongoing mass migration from war-torn countries, such as Syria and Iraq. In addition to criminals flagged by the Migration Board, the number of reports from other sources has also increased, from 42 in 2015 to 79 in 2017.

"A third of these cases concerns events in Syria or Iraq, whereas the rest deal with cases dispersed over countries where conflicts previously have erupted or are in progress. And it's exclusively about men, I cannot remember a single woman who has been suspected," Patricia Rakic Arle, the chief of the police war crimes group, told Svenska Dagbladet.

Lately, Syria, Iraq, Eritrea and Afghanistan have produced the largest number of asylum seekers entering Sweden, according to the Swedish Migration Board.

War Criminals, Terrorists Slipping by Overloaded Swedish Migration Board
Investigating a person for war crimes is time-consuming and costly. A single case may take up to eight years to investigate.

"We carry out many trips to interview the plaintiffs. For instance, in an inquiry into a person's involvement in the Rwandan genocide, six or seven investigative journeys are normally required. So far, our group has carried out three such investigations," Patricia Rakic Arle told Svenska Dagbladet.

In some countries, such as South Sudan, the Swedish police are not admitted at all. To enter other countries, special permission is required. Additionally, the investigative work is hampered by witnesses who refuse to cooperate for fear of reprisals.

The slow progress and the labor intensity of such investigation is the reason so few are brought to justice. In 2017, only four people were convicted of war crimes in Sweden, including a 48-year-old man sentenced to a lifetime in prison for killing seven people in the Syrian army. Having shot them in the head at close range, the man essentially committed a brutal execution. In another case, a 24-year-old man was sentenced to one year and a half in prison for posing with a severed head for his Facebook page. The prosecution gave the man a "discount" as he was already serving a prison sentence for robbery.

Sweden has become famous for its welcoming attitude toward refugees and its commitment to family reunification. It has among the most generous immigration packages in Europe, and welcomed more asylum seekers per capita at the height of the migrant crisis (163,000 in a nation of 10 million) than any of its EU peers.

Sweden has also repeatedly ranked first in the list of best countries for immigrants, most recently by the US News & World Reports.

There is no limitation period for war crimes and therefore those brought to justice can be prosecuted for crimes committed 20 years ago or more.