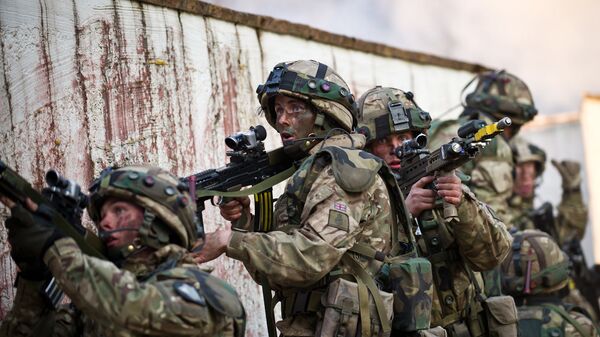 Anatol Lieven: This is obviously to do with the British budgetary process. Obviously he (General Carter) wants more money for the armed forces and for the Army in particular. And obviously this follows on a series of statements about the alleged Russian threat, but this particular one is tied to the immediate budget question.

Radio Sputnik: How big are the cuts that the British armed forces are potentially facing then?

Anatol Lieven: Pretty substantial. It should be noted that the British army is pretty much [at] rock-bottom already. From the looks of the number of troops the British could deploy in Afghanistan, it was pretty pathetic actually, one brigade. And then they failed…

The 'Russian Threat' and the Politics of Mass Distraction
One reason for this, and obviously there’s also what Carter’s statement is about, is that Britain, by the standards of other European countries, spends a high proportion of its income on the military – British defense budget is still higher than that of India, for example — a disproportionate amount has gone to Britain’s nuclear deterrent, and recently to these new British aircraft carriers. Relatively little, by comparison, has gone to the Army, so the Army is feeling rather discriminated against and is obviously pushing back against that.

Radio Sputnik: So do you think Nick Carter is ramping it up, so to speak, to get the attention of the prime minister? Do you think that the issue of Russian military aggressiveness as this vehicle, if you like, to squeeze more money out of the UK government for the UK military purpose?

Anatol Lieven: Well, you know, I wouldn’t like to accuse General Carter of deliberately lying – I don’t think that’s the case. But people within these institutions develop belief systems. It’s highly unusual in the British or any other army to find a soldier who said: ‘Actually, not sure what the British army is for anymore, we don’t need more than a residual force, we’d be crazy to engage in any more expeditions like Afghanistan…’

Radio Sputnik: Is General Carter saying that the British army’s ability to respond to threats is eroded away, and that if Britain doesn’t keep up with its adversaries it’s going to have a non-existent armed forces? Is he using Russia as an adversary in that case then?

Anatol Lieven: The whole question is what are you defending? If you’re defending the British Isles against a Russian invasion, then of course the British army and navy would be sufficient even without allies to do that. But Britain of course does have allies in Western Europe and America who would prevent it, and secondly, Russia would under no imaginable circumstance get to invade Britain, so it’s a non-issue.

The question becomes, of course, where in Europe does Britain defend? If it’s a question of defending the NATO members, including, in my view, even the Baltic States… No sane Russian government – and the Russian government is sane, whether you like it or not – is going to invade the Baltic States, so in a way all of this is a non-issue, a smokescreen.

If, on the other hand, you’re talking about British forces that could fight Russia in Ukraine or in the Caucasus – well, this is also a non-issue, because NATO has shown repeatedly, in 2008 and in 2014, that it isn’t going to fight in those areas; that’s also a non-issue.

In fact, if you approach this whole question logically, rather than from a standpoint of a mixture of emotion and desire for a bigger military budget, that is, to a great extent, an argument about nothing…

The views and opinions expressed by Anatol Lieven are those of the speaker and do not necessarily reflect those of Sputnik.