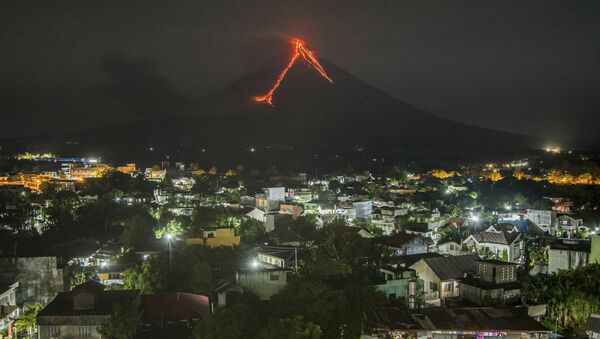 © AP Photo / Dan Amaranto
Subscribe
On Wednesday, the Philippines’ disaster agency announced that more than 61,000 people have been displaced by the flaming eruption of Mount Mayon, which began showing signs of activity a couple of weeks ago.

According to the country's officials, more than 70,000 residents are seeking shelter in schools and other buildings, a number that has almost doubled after the past few days. There were five reported episodes of "intense but sporadic lava fountaining from the summit crater" overnight Tuesday, with ash clouds as high as three miles, the state's volcanology office reported.

On Monday, volcanologists extended the no-go zone from 3.7 miles to 5.6 miles from the crater. Many residents living beyond the no-go zone have also fled to avoid breathing volcanic ash.

"They were not in the danger zone but they are scared," said Cedric Daep, head of Albay Province's civil defense office, AFP reported.

According to relief officials, in many shelters, people are sleeping on floors and as many as 50 people are forced to share a single toilet. Some shelters do not have any toilets at all.

"They are saying that the local government will provide [portable toilets] but until now, there are still none," said Maria Evelyn Grollo, who manages a shelter on the outskirts of Legazpi city.

​According to Local Red Cross administrator Rose Rivero, many evacuees are living on food provided by the government and other charity organizations. The Red Cross is assisting by providing drinking water, hygiene items and counseling services.

"We did not want to leave because we knew life is hard at the evacuation centers. But the ash fall yesterday was just too much," Susan Nolaso, one of the new evacuees, told Philippines television network GMA.

"If we go back to [Mayon's] history of eruption, it would take three to four months before we could send them back to their homes," Rivero said.

According to hotel owners, many tourists have been watching the eruption episodes in awe from the safety of their hotel terraces.

"They are attracted by Mayon's activity. They want to have a closer look," Nics Ortonio, a receptionist at the Oriental Hotel in Legazpi, told AFP.

"This is good for business, but as a resident I am also affected," Ortonio added.

The Philippines is part of the Pacific "Ring of Fire," an area roughly coinciding with the Asian, North American and South American shores of the Pacific Ocean, where frequent earthquakes and volcanic eruptions occur. According to National Geographic, there are 452 volcanoes in the Ring of Fire. Over the past four centuries, Mayon has erupted 51 times and is considered the most turbulent active volcano in the Philippines.