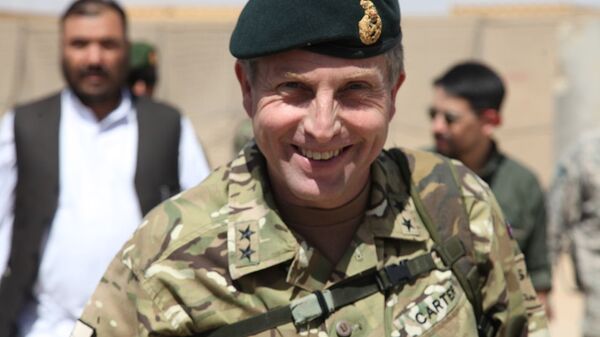 CC0 / /
Subscribe
LONDON (Sputnik) - The Western countries should determine Russia's weak points and remember its respect for the strength in order to counter Moscow, Gen. Nick Carter, the chief of the UK General Staff, said at the lecture at the Royal United Services Institute think tank on Monday.

"What should we be doing differently? First of all, I think that we should recognize that Russia respects strength and people who stand up to them. The original plan for Ukraine had been to acquire significantly more terrain. However, Russia was surprised by Ukrainian resistance and had to settle for less. We should identify Russian weaknesses and then maneuver asymmetrically against them," Carter said in a lecture, available on the think tank's YouTube channel.

The UK chief of the General Staff suggested building institutions in neighboring countries that would be able to help these states withstand outside pressure and reducing the dependency of the Western countries on Russia's energy.

"We should be telling the Russian population what is really going on," Carter claimed.

The UK military chief stressed the importance of protecting the cyberspace, finding out the United Kingdom's vulnerabilities to "Russian malign influence and disinformation."

2018 - The Year in Russophobia
The UK general added that it was important to maintain NATO presence in Western Europe and keep improving the Alliance's capabilities.

Moscow has repeatedly pointed out that it is not a party to the internal conflict in Ukraine, where two regions in the east of the country proclaimed independence after a new government came to power in Kiev in 2014. Following the establishment of the new government, Crimea rejoined Russia via a referendum, where over 90 percent of the peninsula's residents voted for the region to become part of Russia.

The referendum has not been recognized by Kiev and Western countries, which consider Crimea part of Ukraine. However, Russian President Vladimir Putin has stressed that the issue has been closed once and for all.

At the lecture, the chief of the UK General Staff also claimed that Russia is capable of starting hostile actions earlier than expected, surprising its potential opponents with something that had not been seen before.

000000
Popular comments
"We should be telling the Russian population what is really going on," Carter claimed. The Russian people, for the most part do know what is going on. They have also, since the 90's seen the what truth and honesty mean within a capitalist west. Carter is earning his money, nothing more. The man is a high ranking fool.
michael
23 January 2018, 07:53 GMT9
000000
Russia's weakness is that they're far too patient with the West, the U.S. and the U.K. in particular. One day the West is going to poke Russia one time too many and get the comeuppance they so well deserve.
jfc46wv
23 January 2018, 08:12 GMT11
000000
Newsfeed
0
New firstOld first
loader
LIVE
Заголовок открываемого материала
Access to the chat has been blocked for violating the rules . You will be able to participate again through:∞. If you do not agree with the blocking, please use the feedback form
The discussion is closed. You can participate in the discussion within 24 hours after the publication of the article.
To participate in the discussion
log in or register
loader
Chats
Заголовок открываемого материала
Worldwide
InternationalEnglishEnglishMundoEspañolSpanish
Europe
DeutschlandDeutschGermanFranceFrançaisFrenchΕλλάδαΕλληνικάGreekItaliaItalianoItalianČeská republikaČeštinaCzechPolskaPolskiPolishСрбиjаСрпскиSerbianLatvijaLatviešuLatvianLietuvaLietuviųLithuanianMoldovaMoldoveneascăMoldavianБеларусьБеларускiBelarusian
Transcaucasia
ԱրմենիաՀայերենArmenianАҧсныАҧсышәалаAbkhazХуссар ИрыстонИронауОssetianსაქართველოქართულიGeorgianAzərbaycanАzərbaycancaAzerbaijani
Middle East
Sputnik عربيArabicArabicTürkiyeTürkçeTurkishSputnik ایرانPersianPersianSputnik افغانستانDariDari
Central Asia
ҚазақстанҚазақ тіліKazakhКыргызстанКыргызчаKyrgyzOʻzbekistonЎзбекчаUzbekТоҷикистонТоҷикӣTajik
East & Southeast Asia
Việt NamTiếng ViệtVietnamese日本日本語Japanese中国中文Chinese
South America
BrasilPortuguêsPortuguese
NewsfeedBreaking
09:00 GMTUS to Upgrade Military Infrastructure, Develop New Bases in Australia, Guam to Counter China
08:53 GMTMoscow Rejects US Claims on Religious Persecution in Russia, Pledges Retaliation
08:44 GMTGhislaine Maxwell Likened to 'Eve in Garden of Eden' For Being 'Vilified' For Epstein's Sex Crimes
08:28 GMTCOVID-19 Live Updates: China Says 2022 Winter Olympics to Be Held as Planned Despite Omicron Spread
08:27 GMTCasualties Feared as Military Helicopter Crashes in Azerbaijan
08:15 GMTEt Tu? US Steals Most of Australia's Sale to China Amid Trade Row, Finds Study
07:49 GMTModerna CEO Thinks COVID-19 Vaccines Will Lose Efficacy Due to Omicron Strain
07:48 GMTLawyer Calls Jussie Smollett 'Real Victim' as Prosecutor Slams Actor's 'Secret Plan' for Hate Hoax
07:14 GMTBiden Axes Supply Chain Crisis Address, Seeks 'Ample Time' to Meet Business Leaders at White House
06:55 GMTSwedish Professor Pins COVID-19 Mutations on Skewed Vaccine Distribution
06:51 GMT'Happy Day': Indians Excited as Parag Agrawal Appointed Twitter CEO
06:45 GMTBill Seeks to Bar Politicians With Criminal Charges From Serving as Israeli PM, But Is It Realistic?
06:34 GMTJapan Supports Postponement of WTO Meeting Due to Omicron Variant
06:22 GMT'Insult to Legacy': Gucci Heirs Threaten Lawsuit Over 'House of Gucci' Movie
06:09 GMTFamily in India 'Robbed on Pretext of Vaccination Against Omicron Strain'
06:09 GMTPolice Reportedly Search Marilyn Manson's LA Home Amid Probe Into Sexual Assault Claims
06:01 GMTIslamists, Terror Financiers and Motorcycle Gangs Reportedly Received COVID-19 Aid in Sweden
05:28 GMT'Shine Like a Diamond': Barbados Declares Rihanna National Hero as Island Becomes Republic - Videos
05:25 GMTA New Republic Is Born as Barbados Cuts Cord with UK Monarchy, Ditches Elizabeth II As Head of State
05:16 GMTSwedish Researchers Face Prosecution for Study About Immigrants' Prevalence in Rape Verdicts