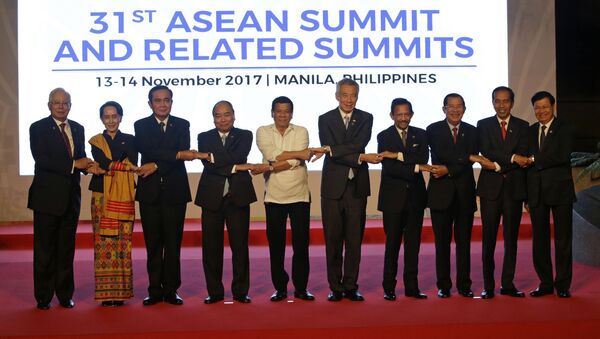 © AP Photo / Aaron Favila, Pool
Subscribe
India and the ASEAN countries share a common thread of traditional designs and exquisite weaving art which they are seeking to convert into a strength.

New Delhi (Sputnik) — India and the countries of the Southeast Asian block ASEAN are exploring a partnership model that would have the potential to lead the global trade in textiles.

Industry leaders from ASEAN are currently in New Delhi to participate in the conclave titled ‘India-ASEAN weaving Textile Relations' organized by the Federation of Indian Chambers of Commerce and Industry (FICCI).

Addressing the conclave, India's minister for textiles Smriti Zubin Irani urged ASEAN industry to set up manufacturing bases in India to cater to the domestic market and exports.

"Civilizational ties and legacy and history of fabric and weaving will strengthen the Indo-ASEAN ties in the future," Minister Irani said.

Anant Kumar Singh, Secretary, Ministry of Textiles, called upon ASEAN countries to use India as a gateway to the markets of West Asia, Europe, and the west.

"India can be a reliable partner for ASEAN countries for its textile industry and, in turn, the countries can use India as a gateway to reach out to the west Asian, European and other western markets," Singh said while addressing the conclave.

Ace designer veteran Ritu Beri advocated the Japanese model of combining the traditional with the contemporary in order to be able to cater to the global taste.

Meanwhile, Sanjaya Baru, Secretary General of the industries body FICCI emphasized that Indo-ASEAN friendship was born in the crucible of a common heritage of fight against colonial forces and that textile and weaving formed an important part of the struggle against imperialism and hence both India and ASEAN must use textiles to forge its friendship ahead.

India is celebrating the silver jubilee of its relationship with the ASEAN that comprises Thailand, Vietnam, Indonesia, Philippines, Malaysia, Singapore, Myanmar, Cambodia, Laos, and Brunei. The heads of the states of these ten nations are slated to be the guests of honor at India's Republic Day celebrations on January 26.