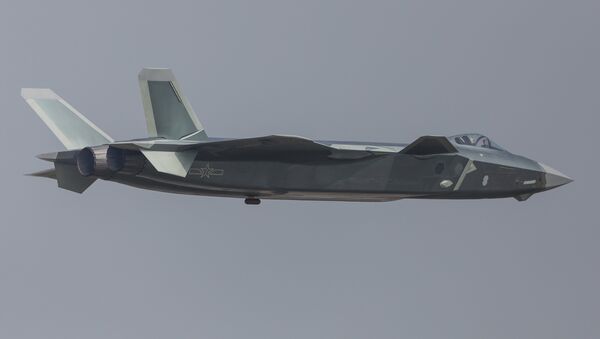 China’s fifth-generation J-20 jets took part in their first air combat drills at the start of January, according to a People’s Liberation Army Air Force announcement.

The exercises featured J-20 aircraft simulating aerial combat with older J-16 and J-10 fighters and involved H-6K long-range bombers in some capacity, the Diplomat reported Tuesday, citing the air force. The location of the drills, which lasted nine days, has not been disclosed, the news outlet noted.

The Chinese Ministry of National Defense declared last fall that the jet had been commissioned into service, but it's not clear whether the planes have reached full operational capability.

Adapting the J-20 to current operations is likely to be "a very long and painful" road, as the US has learned during costly F-22 Raptor and F-35 Joint Strike Fighter implementations, said Vasily Kashin, fellow at the Center for Comprehensive European and International Studies in Moscow. "The process of fifth-gen fighters' introduction to the US Air Force was very long and painful… there's no reason to think China would be different."

The plane has spurred controversy among US officials who say that the J-20 virtually mirrors Lockheed Martin's F-22 Raptor. "What they've been able to do in such a rapid period of time without any R&D, do you believe that gives them a competitive advantage?" Senator Joe Manchin (D-WV) asked during a Senate Armed Services Committee hearing in 2015.

"They're making leaps, which are uncommon, at the behest of us, and we know this… but we're not taking any actions against them," Manchin said to then-Director of National Intelligence James Clapper. "We know the J-20 is pretty much mirroring our F-22," the senator said.

Clapper replied that a "proportional response" was being considered and response options don't necessarily follow a tit-for-tat pattern with Beijing. "I at least think it's good to think about the old saw that people who live in glass houses shouldn't throw rocks," the director noted.

This response drew harsh criticism from Senator John McCain (R-AZ), who said, "So it's okay for them to steal our secrets that are most important, including our fighters, because we live in a glass house? That is astounding," McCain said at the time.

But the J-20 isn't the only new aircraft being added to the Chinese air force: several also-new J-16 squadrons were added as part of the air force's modernizing trend earlier this month, Sputnik reported.