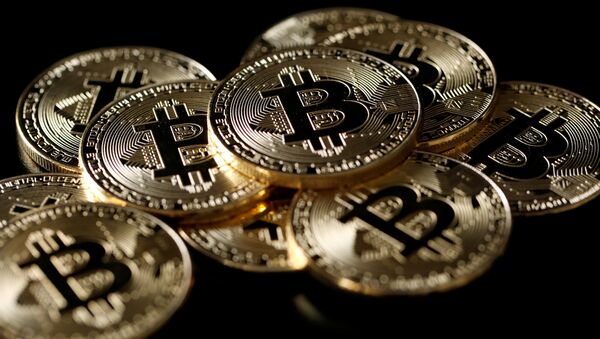 Denis Bolotsky
All materialsWrite to the author
Russian entrepreneurs joined their western colleagues at the World Economic Forum in Davos. CEO of Universa Alexander Borodich sat down with Sputnik correspondent Denis Bolotsky to talk about bitcoin volatility and the possibility of world governments embracing blockchain technology on an industrial scale.

Sputnik: Bitcoin is a buzzword right now, it’s all over the news. With all of its volatility, with its ups and downs, do you think there is future in bitcoin?

Alexander Borodich: I perceive bitcoin as a kind of digital gold. And I think a lot of people also think more or less like that. So while millions of those who share this opinion with me are trying to get their portion of bitcoin, the demand will push the price point higher and higher every day. But due to stock volatility of bitcoin, we may see that each and every [piece] of negative news are actually dropping down the exchange rate quite seriously. So, currently, we may see that due to the news from China and Korea, the price went down to $10,000. And I think that due to a couple of negative bits of news from Europe, from the potential regulation of bitcoin in France in Germany we will also see an additional drop, I think, to about $8,000 per bitcoin. But long-term, I think, bitcoin will continue to grow.

​Sputnik: You mentioned that media messages affect the rate of bitcoin. Can we measure this effect in numbers?

Alexander Borodich: Of course, it’s highly hypothetical – it’s difficult to forecast the impact of each and every [piece of] news on the exchange rate – but I will say that each negative [piece] of news may actually drop the exchange rate by 10-15%.

Sputnik: There are new cryptocurrencies appearing each year. What is the next big thing to watch out for?

Cryptocurrency: 'Biggest Evolution of Financial System in History' – Investor
Alexander Borodich: I would not recommend to unprofessional investors even to try to invest into cryptocurrencies because you know, it’s not that easy to forecast their exchange rates. But I think that we currently see the very-very early days of cryptocurrencies and we will see at least probably hundreds of new coins this year, and I think at least the top ten of them will be those, which you may try to monitor, and then make a conscious decision to invest or not to invest.

Sputnik: You mentioned investors. But what about small-scale miners? Last time we spoke in Vladivostok last year,  you mentioned industrial-scale blockchain technology becoming more widespread. What about private individuals who decided to buy a bunch of PC video cards and started mining – are they still able to succeed?

Alexander Borodich: Actually the miners, they at least have a mathematical–economical model to see that they will get their first net profit in a year. Despite the exchange rate, they will get more or less, but they will definitely earn something. In the long-term they will earn some significant amount of money. From this perspective, I would recommend mining over trading, but in terms of an amount, it’s quite difficult to achieve a significant amount of profits using your home electricity, or computers – the farm that you may have built at home. So, due to scale, it’s quite easy to achieve a lot of profits building up the mining factory at those places where the price of electricity is quite low, but not at home.

Universa CEO Alexander Borodich to Sputnik on future of cryptocurrencies: We are in the early days of cryptocurrencies. We will see probably 100 new coins this year, perhaps some in the top 10 of those are the ones to monitor pic.twitter.com/W7jeFCVMMX

​Sputnik: Your company – Universa – is working with blockchain technology. What are you presenting here in Davos?

Bitcoin Plummet 'Healthy Correction' Rather Than 'Bursting of Bubble'
Alexander Borodich: We have just finished our token sale last month. We were able to attract more than 700,000 people who have our tokens,  from which 26,000 people have invested cryptocurrencies into our project and believed in our project. So, currently, we are launching the main blockchain, which is definitely one of the fastest, or probably the fastest in the world, because we have more than 20,000 transactions per second, compared to 10-15 transactions per second on Etherium, or 1-2 transactions per second on the bitcoin blockchain.  And also we have the cheapest transactions currently compared to these two blockchains. In our case, the price per one transaction is just one cent. And also, of course, we have the most secure smart contracts. In our case, it’s simply impossible to hack smart contracts. And as you know, there were a lot of cases when smart contracts on Etherium were hacked and all the money was stolen from there.

Sputnik: You are meeting world leaders here at the Economic Forum. Over time, have you noticed any increase in their attention to bitcoin technology?

Alexander Borodich: Fortunately for us, governments and countries currently do understand the difference between blockchain and cryptocurrency. And they do understand that blockchain might be the next technological wave, and a lot of processes will be switched from centralized to decentralized. And in that case, they would definitely need the solution to put their new processes at the infrastructural level. And Universa is one of the solutions on the market, and currently, there are not many such companies. So we are definitely in the top five in the world, [among those] who may deliver such solutions for large corporations and the governments.