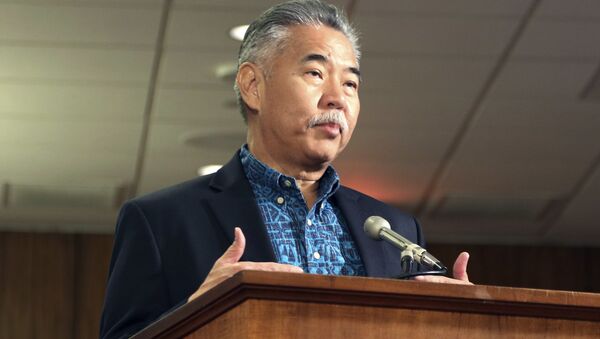 © AP Photo / AP Photo/Jennifer Sinco Kelleher
Subscribe
International
India
Africa
As if a false incoming missile alert isn’t bad enough, Hawaii’s governor revealed he took 17 minutes to tweet that the alert was a mistake because he forgot his Twitter password.

"I have to confess that I don't know my Twitter account logons and the passwords, so certainly that's one of the changes that I've made. I've been putting that on my phone so that we can access the social media directly," Hawaii Gov. David Ige (D) told reporters on Monday, the Washington Post reported.

On January 13, Hawaii residents received an emergency notification warning of an incoming ballistic missile. The alert was sent out when an employee at Hawaii's Emergency Management Agency mistakenly selected the wrong option from a drop-down menu, according to the agency. The US Federal Communications Commission has reassigned the employee while they investigate the incident.

Even though Ige was informed within two minutes that the alert was false, it took him almost 20 minutes to inform his 7,687 followers. It took officials at the Hawaii Emergency Management Agency even longer — 38 minutes — to send out the reassurance alert.

"I was in the process of making calls to the leadership team both in Hawaii Emergency Management as well as others. The focus really was on trying to get as many people informed about the fact that it was a false alert," Ige said.

Some lawmakers, such as Rep. Tulsi Gabbard (D-Hawaii), were quicker to tweet an update that the alert was a mistake.

Vern Miyagi, the head of Hawaii's Emergency Management Agency, announced that the agency would start to implement a two-person authorization system to send test and real alerts in place of the current system, which requires only a one-person authorization.

"I deeply apologize for the trouble and the heartbreak that we caused today," Miyagi said at a press conference on January 13. "We made a mistake."

Despite being in the middle of the vast Pacific Ocean, the threat posed by a missile is real in Hawaii. A missile inbound from North Korea, for example, would only leave Hawaii's residents with about 15 minutes to take cover after receiving the alert.