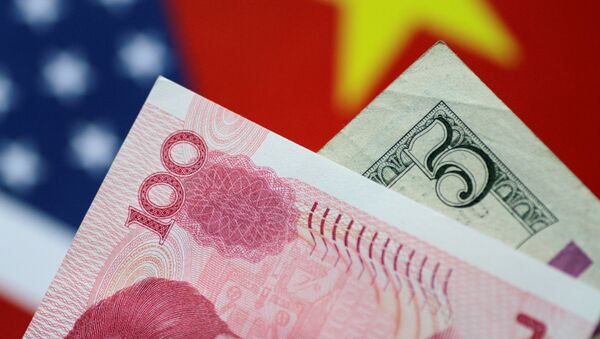 Professor of Public Policy at the University of Maryland and political analyst, John Short, told Radio Sputnik how mutual economic interests might affect the relations between Washington and Beijing, and what exactly worries the United States about China.

The new strategy recently unveiled by US Defense Secretary James Mattis designates countering China's and Russia’s rapidly expanding military, and not terrorism, as  the main focus of the United States national security.

And as Professor Short explained, the relations between US and China are currently “a bit of a mixed bag”: while President Donald Trump had a successful meeting with Chinese leadership and even “changed his opinion from the campaign rhetoric,” the new strategy essentially undercuts this emergent special relationship.

Radio Sputnik: China and the US are the world’s largest and second-largest economy, and their economies are extremely intertwined and interdependent on each other.What can you say about that economic fact on the background of everything that’s been going on in the relationship? And do you think that the fact that there’s so much to be economically gained by both sides will see continued cooperation?

John Short: In terms of global security you’d likely think that a shared economic interest will trump any military confrontation or possible military confrontation. There are enormously shared economic interests. However, there’s rhetoric in the US about the asymmetry in the trade relations, with China running up in surplus and America left with trade deficit.

'Cold War Mentality': US Defense Strategy Includes False Judgments on China
But China buys a great deal of US treasuries; they have shared interest in an open global economy. You would think that over the long term this would override any short-term military engagement or possible engagement.

John Short: Yes, US feels threatened by Chinese economic expansion globally and its military expansion in the South China Sea. And China, I think, has a reason to worry about this new strategy – it still may be a strategy rather than an actual process.

I’m still not sure where it came from, to be honest; it came from the bowels of the Defense Department, and it struck many people as rather odd, given the political rhetoric from Trump and the emphasis on terrorism. I think that even analysts in the US are still trying to deconstruct this new strategic statement.

The views and opinions expressed by John Short are those of the speaker and do not necessarily reflect those of Sputnik.