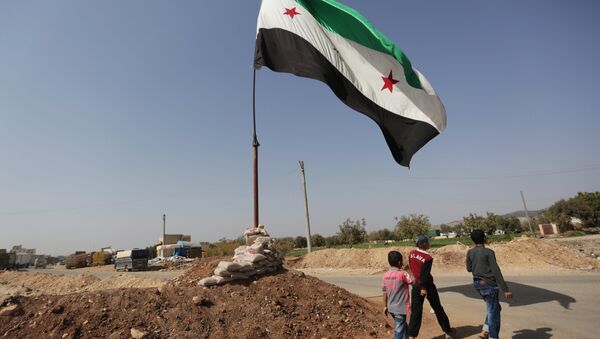 On Saturday, the Turkish leadership announced a military campaign in Syrian Kurdish-controlled Afrin, with the operation on the ground starting the following day.

According to Anadolu news agency citing a military source, the Turkish Armed Forces have started an operation in Azaz, located to the east of Afrin in northern Syria.

The Turkish "Olive Branch" operation conducted jointly with Free Syrian Army rebels against the Syrian Kurdish PKK and the YPG was launched on Saturday with airstrikes and continued the following day with the start of the campaign on the ground.

According to the Turkish authorities, the operation is set to end swiftly. President Recep Tayyip Erdogan vowed that his troops will destroy the Kurdish militia in Syria, that have been supported by the United States.

Earlier in the day, Anadolu reported that Turkish forces have established control over 11 positions taken from Kurdish forces.

However, according to a representative of the Syrian Kurdistan in Moscow, Rodi Osman, the Syrian Kurds forced Turkish troops and Ankara-backed rebels to retreat from their territory.

SDF Announces Readiness to Defend Kurds From Turkish Offensive in Syrian Afrin
Syrian President Bashar Assad has condemned the operation calling it a "brutal attack," while Moscow has stated that US arms supplies to the Kurdish fighters have forced Ankara to launch the operation.

Ankara has been mulling the possibility of an offensive in Syria’s northern Kurdish-controlled Afrin following a reported US plan to train Kurdish forces in Syria to patrol the country's border with Turkey. The force is expected to be staffed partly by the SDF, affiliated with the Kurdish People's Protection Units (YPG), which Turkey believes to have ties with the Kurdistan Workers Party (PKK), designated as a terrorist group in Turkey.