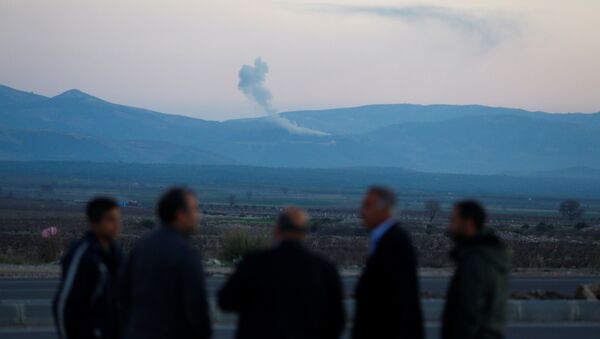 © REUTERS / Osman Orsal
Subscribe
International
India
Africa
MOSCOW (Sputnik) - Ankara is pressing forward with the operation against the Kurdish forces in Syria’s northwestern Afrin district, which began on Saturday, amid concerns and condemnation of some of the regional players.

The offensive started with 72 Turkish aircraft carrying out airstrikes in the district, while on Sunday, Turkish Prime Minister Binali Yildirim confirmed the beginning of the ground operation.

Afrin, located close to the border with Turkey, is controlled by the Syrian Kurds' militia, People's Protection Units (YPF), which Ankara considers a branch of Turkey's Kurdistan Workers' Party (PKK), designated as a terrorist organization in several countries.

The international reactions have varied from cautiousness to outright indignation. Damascus, in part, has slammed Ankara's actions as a violation of Syria's sovereignty.

"This is sheer act of aggression, in breach of international law, an infringement on Syrian national territory, and a violation of all UN resolutions calling on respecting the sovereignty of Syria," Syria’s ambassador to China and former ambassador to the United States, Imad Moustapha, told Sputnik on Monday.

The ambassador stressed that Damascus would "take every possible action to liberate" any Syrian territory held by the Turkish troops.

The offensive will affect the Syrian National Dialogue Congress in Russia's Sochi, although Moscow and Tehran, which along with Ankara are the key forces behind the upcoming intra-Syrian talks, are trying to find a diplomatic solution to the issue at hand, the Syrian ambassador said.

"To give Russia credit, it has tried hard to convince the Kurds in Afrin to reintegrate the town with the Syrian state, but their hubris would cloud their judgment, and now they are paying the price for their obstinacy," Moustapha noted.

Turkey Didn't Promise Russia to Limit Military Op in Syria to Afrin - Deputy PM
The Russian Defense Ministry said Saturday that Moscow was closely following the situation in Syria's Afrin and voiced its concern over the beginning of Turkey's operation. Moscow reiterated its position, based on the need to preserve Syria's territorial integrity, respect of its sovereignty and the political settlement within the framework of the UN Security Council resolution.

France has called for an emergency meeting of the United Nations Security Council on Syria, following the beginning of the Turkish campaign. French Foreign Minister Jean-Yves Le Drian said Sunday that not only Afrin, but several other regions, required urgent attention.

US State Department spokeswoman Heather Nauert on Sunday called on Turkey to show restraint during the operation in northern Syria. Washington stated, however, that it recognized Turkey's right to carry out legal activities in order to ensure its security.

However, the Kurds, for their part, should join the negotiation process in Sochi, rather than rely on the backing of the United States, the politician suggested.

"The Kurds should enter Sochi process and open dialogue with the Syrian government instead of being blindly used as a tool by Americans, which still have not given up plans to divide Syria," Ahmad said.

Thierry Mariani, a French politician and member of The Republicans party, also pointed out the danger, for Ankara, of even a possibility of a Kurdish state in neighboring Syria.

"Turkey cannot tolerate even an embryo of the Kurdish state as it is crucial for its territorial integrity," the French politician said.

Turkey has a sizable Kurdish minority of its own and for years has been involved in an armed conflict with the PKK. Ankara, wary of Kurdish nationalism, has denounced the support given to the Kurdish forces in Syria by the United States. Besides, the territories controlled by the mainly Kurdish forces, in Northern Syria, close to the border with Turkey, are de facto largely autonomous.

The Syrian Democratic Forces (SDF), which incorporate several militias, including Kurdish ones, said that three SDF fighters died in the first three days of the Turkish campaign. Eighteen civilians were killed and 23 were injured, the SDF said, according to the ANF news outlet.

The Syrian militias claimed that 40 Turkish troops and affiliated forces were killed, and two Turkish tanks were destroyed in the offensive.

US-Backed SDF Considering Sending Reinforcements to Afrin Amid Turkish Op
Rodi Osman, a representative of Syrian Kurdistan to Russia, said Monday that 17 civilians had been killed and 28 had suffered injuries as airstrikes and clashes continued in Afrin.

Osman said that neither Turkey, nor its ally, the Free Syrian Army (FSA), were able to take control of any territories. The Turkish offensive prompted a push-back as a rocket launched from Afrin hit the FSA camp n the Turkish province of Hatay, killing at least two and injuring 12 others.

However, Erdogan vowed on Monday that Ankara would not retreat before settling the issue. According to media reports, the Turkish forces have launched a new offensive in the city of Azaz east of Afrin.