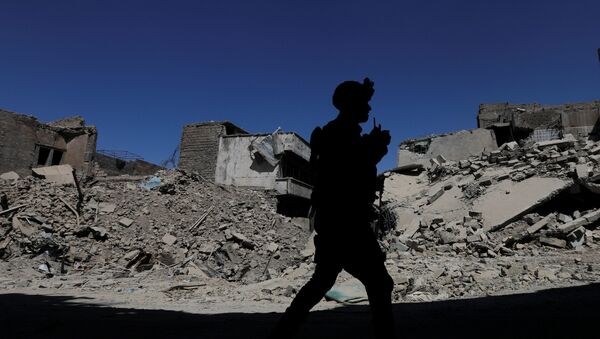 © REUTERS / Suhaib Salem
Subscribe
International
India
Africa
The United Nations has reported that a breathtaking 2.6 million Iraqis have been displaced during the three-year civil war with Daesh that has only concluded in December. Almost half of these millions are children.

After three years of bloody fighting that left between 90,000 and 125,000 people dead, Iraq finally wrested control of Daesh's last strongholds in December 2017. Prime Minister Haider al-Abadi declared victory on December 10, although Daesh is expected to continue their insurgency as a guerrilla and terrorist group.

It'll also be a long road to rebuild the lives of the millions of Iraqis who were displaced by the fighting. The United Nations Children's Fund (UNICEF) reported that in addition to the 1.3 million displaced, another 2.7 million children in Iraq are living in poverty.

"We believe that as a result of the conflict, a lack of investment over the years, and the poverty… that there are 4 million children now in need across Iraq," said Peter Hawkins, chief of UNICEF operations in Iraq, during a news briefing in Geneva.

Other threats face Iraqi children, Hawkins said. He pointed to the city of Mosul, formerly Daesh's capital in Iraq and the site of a nine-month-long siege that left the vast majority of the city destroyed.

"The biggest threat to children in West Mosul, unquestionably, is unexploded ordnance, which are being cleared everywhere. We know that that is a perennial problem. One that perhaps will never ever fully go away because of the sheer number of unexploded ordnances that are scattered in the western part of the city," Hawkins said.

Hawkins added that UNICEF had begun a program to protect and reintegrate the children of suspected Daesh militants back into society. At present, the families of Daesh fighters are being held in detention camps.

"Last year alone, 270 children were killed. Many were robbed of their childhood, forced to fight on the frontlines," said UNICEF's Middle East Director Geert Capelaere in a statement on Friday. "Some will bear the physical and psychological scars for life due to exposure to unprecedented brutality."

"Violence is not only killing and maiming children; it is destroying schools, hospitals, homes and roads. It is tearing apart the diverse social fabric and the culture of tolerance that hold communities together."

He pleaded with the international community to prioritize aid to Iraqi children. "Member states and the private sector should turn financial pledges into concrete commitments for children," Capelaere said. "This is fundamental for rebuilding a peaceful and prosperous Iraq away from the vicious cycles of violence and intergenerational poverty."

Another challenge is that the mass displacements have reignited friction between different Islamic sects. Sunni Muslims uprooted from their homes have lobbied to postpone national parliamentary elections until their communities can be resettled, but the Shi'ite-controlled government of al-Abadi have insisted that the elections must proceed as planned on May 12.

Washington chimed in by agreeing with al-Abadi's assessment that the elections must not be delayed. The State Department issued a statement on Thursday in which they said such a delay would "set a dangerous precedent, undermining the constitution and damaging Iraq's long-term democratic development."