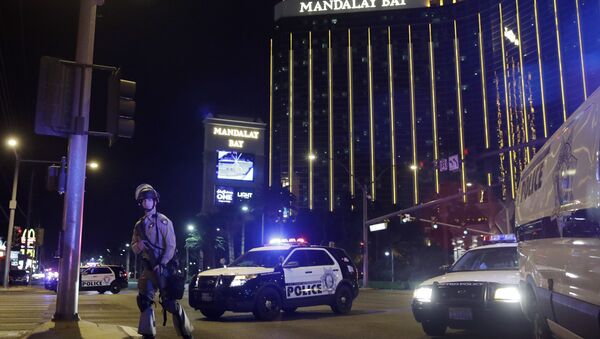 © AP Photo / John Locher
Subscribe
International
India
Africa
Stephen Paddock, who killed 58 people and injured more than 800 in the October 2017 shooting spree in Las Vegas, was a gambler, obsessed with cleanliness, possibly bipolar and having problems with his girlfriend, media reports said, citing the results of a three-month police investigation.

Paddock’s girlfriend, Marilou Danley, told investigators that he had become “distant” in the year before the shooting. She also described him as “germophobic” with strong reactions to smells, always feeling ill, in pain and fatigued, the Guardian wrote.

According to the report, Paddock’s doctor believed that he suffered from bipolar disorder.

Laptop Found in Las Vegas Gunman's Hotel Room Missing Hard Drive - Reports
He said that Paddock denied the possibility, was fearful of medication and often refused to take it.

Investigators have also learned that the 64-year-old retired accountant and real estate investor suffered from “bouts of depression,” apparently caused by the loss of a “significant amount of wealth”’ since 2015.

Yet he still managed to pay off his gambling debts ahead of the October 1, 2017 shooting.

On the night of Sunday, October 1, 2017, Stephen Paddock opened fire on a crowd of an estimated 22,000 concertgoers attending a music festival in Las Vegas, leaving 58 people dead and 851 injured.

During the 10-minurte shooting spree, Paddock fired more than 1,100 rounds from his suite on the 32nd floor of the nearby Mandalay Bay hotel.

About an hour after Paddock fired his last shot he was found dead in his room from a self-inflicted gunshot wound. His motive is still unknown.

The incident is the deadliest mass shooting committed by an individual in the United States.