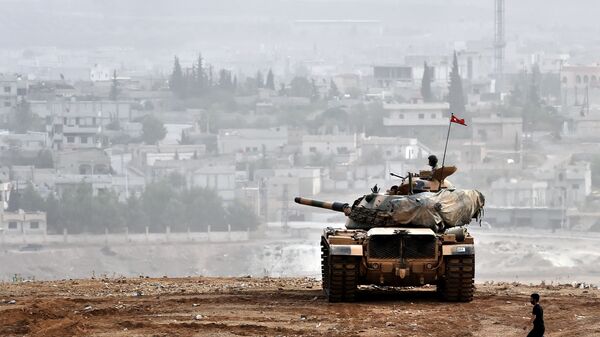 © AFP 2023 / ARIS MESSINIS
Subscribe
International
India
Africa
A video has appeared on YouTube showing the Kurdish YPG militia launch an anti-tank guided missile at a Turkish Leopard tank as the Turkish Army advanced toward Afrin in an offensive against the Kurdish forces.

According to the ANF News agency, the tank was hit in the area of the village of Kurdo in the Bilbil district of the Syrian city of Afrin on Sunday morning.

The video has been posted on the YouTube channel of the Kurdish People's Protection Units (YPG).

Two tanks were hit in the village of Diqmetash and two in the vicinity of the town of Tel-Rifat. It is in these areas that the fiercest battles are currently being fought between Kurds and the Turkish Army.

The Kurdish command reported that four Turkish soldiers and 10 pro-Turkish guerrillas were killed in the fighting in northwestern Syria.

"As a result of these clashes, 10 members of the gang were killed in different parts of the region, 20 bandits [members of the armed Syrian opposition] were wounded. In addition, four Turkish soldiers were killed and many were injured in clashes in Bilbil,” the YPG reported in a press release.

It also said that during the clashes three soldiers of the Kurdish militia were killed.

Erdogan: Turkey to Quickly Conclude Op in Syria as Terrorists Already Fleeing
Turkey launched an offensive in northern Syria against the Kurdish forces Ankara considers terrorists. The operation dubbed "Olive Branch" was launched with airstrikes on Kurdish targets in Afrin on Saturday.

The strikes resulted in the damage of 108 targets out of 113 planned.

On Sunday, Turkish Prime Minister Binali Yildirim confirmed the beginning of a ground offensive in the region.

It was noted that Turkish armored vehicles had advanced some 3.5 kilometers into the Syrian territory.

The situation on the Syrian-Turkish border had recently become tense, with the Turkish armed forces shelling YPG positions, which it considers to be an affiliate of the Kurdistan Workers' Party (PKK), designated as a terrorist organization in Turkey and several other countries.