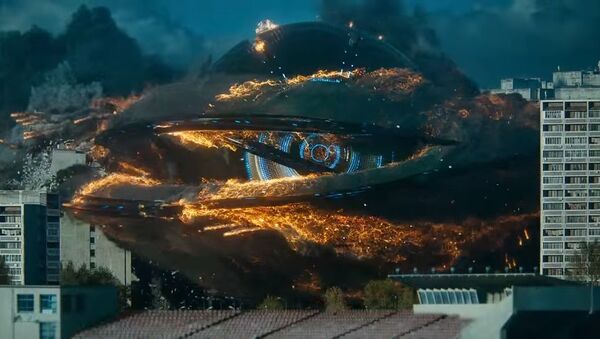 By Maud Start — It is a rare feat for a subtitled sci-fi to hit the screens on such a large scale, but the English subtitles do not take away from the crisp imagery and soft color palette woven together by Bondarchuk. Attraction will, as the ambassador says, 'mesmerize the movie world', and you know what? It just might. The script punctuates a classic sci-fi backbone with morals, love, and gritty urban scenery. Without spoiling the narrative for any avid moviegoers: An alien spaceship crash lands, destroying Moscow and killing millions. Girl falls in love with the humanoid alien, and teaches him to smile. Meanwhile a soup of revolt, social media uprising and swiftly morphing antiheros colorizes the standard sci-fi plot.

In an interview with the Sci-Fi Bulletin, director Fedor Bondarchuk notes how at the core of Attraction lays societies 'intolerance to anything foreign'. Sure enough, the film circulates with discourse surrounding the 'Other'. Xenophobic images pepper the mise-en-scene; graffiti on the sidewalk reads, ‘This is our Earth'- whilst the protagonists spit curses- "if they hadn't come then Sveta would be alive still'. Rather than focusing on the extraterrestrial intruders as ‘alien', they are depicted as foreign bodies, hogging the focus of the military and the authorities, and stealing the hearts of our loved ones.

'Attraction' was actually such a good movie! The cgi's and the story were cool, go see it if you have a chance:).

Harvard Astronomer Gives Pointers on Searching for Space Aliens
The climax of the film is certainly reminiscent of the anti-migrant riots of 2013, when Moscow erupted with riots following the supposed stabbing of a local. But it's frivolous to dwell on whether Attraction alludes to Moscow 2013- or to the global migrant crisis, as yet unresolved, and mishandled by so many. As a portrait of urban life, Attraction is applicable to any uprising drawn from crowd psychology, and the potent pull of social media.

Dina, a film studies student from St Andrews was in the mind that Attraction needlessly trivialized violence, even depended on it to forward the plot. But any fantastical aggression in the plot only matched the violence of modern day society. It is easy to polish the violent lens of Attraction, exposing the moral beneath: the foreign body is not the enemy. Securing this once and for all is the chilling line at the close of the film "You're society is extremely aggressive".

And the main message from Bondarchuk as a director? Let's try to hear each other, outside of our differences.

Overall, Attraction was impressive. The CGI was on point and not at all jarring to the eye, and the very fact that the aliens didn't crash land in Los Angeles proved a breath of fresh air. The social overtones were visceral, with casual alludes to fake news and youth restlessness. Should Bondarchuk make a sequel? Perhaps not — but it is refreshing to see some competition for the Hollywood Blockbuster, and at a fraction of the production cost, here's hoping that Bondarchuk has more up his sleeve.

The views and opinions expressed in the article are those of Maud Start and do not necessarily reflect those of Sputnik.