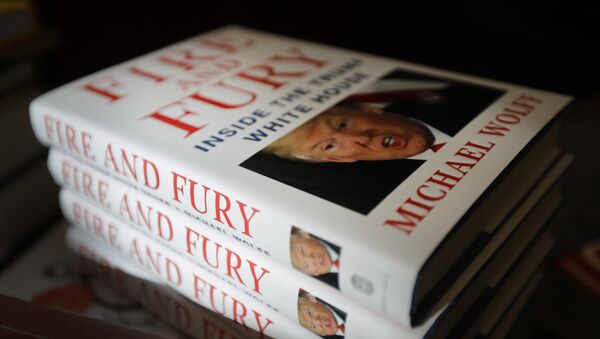 US President Donald Trump has yet to comment on the allegations from the author of the book "Fire and Fury," allegedly detailing the inside of the White House under the new administration.

Michael Wolff, the author of the "Fire and Fury" biography, which Trump has called a "work of fiction" and a "disgrace," has claimed that the US president is having an "affair."

In an interview on HBO's Real Time, when asked whether Trump was "f***ing" anyone "right now," Wollf said "Yes,"  but however refused to name the mystery woman.

"You just have to read between the lines," he said, adding, "Now that I’ve told you, when you hit that paragraph, you’ll say bingo."

Trump has yet to comment on the claims, however, he has repeatedly slammed Wolff as a "fraud," while the White House has called "Fire and Fury" a "trashy tabloid fiction" sourced by "false and misleading accounts" from people pushing "sad desperate attempts at relevancy."

READ MORE: Outraged by the 'Fire and Fury' Book, Trump Urges for Tighter US Libel Laws

The HBO host tried to get more details, but when Wolff mentioned “back doors” that could allow Trump to have an affair in the White House without anyone noticing, this prompted a joke with Bill Maher saying, "There are back doors? Oh, it’s a gay liaison!" and guessing whether the "woman" Trump is having an affair with was Former White House Press Secretary Sean Spicer.

Twitter uses have been quick to react to the claims with memes and jokes.

According to Wollf, Trump is humping a "mystery" woman, but he can't produce the "blue dress"... I Venture At No Karma Always, perhaps???

Is Trump currently having an affair with her? She’s drop dead gorgeous. pic.twitter.com/ZzJ2YGa4Ca

First : Trump is IN LOVE with himself. Second: I would not doubt Trump having an affair right now .

Some have even tried to guess the identity of the woman, saying that it could probably be US Envoy to the UN Nikki Haley... or White House Communications Director Hope Hicks or even mother of four Kellyanne Conway.

Michael Wolff was on Bill Maher’s show on Friday and revealed that his book subtly exposes an affair which Trump has been having in the White House. He didn't identity of the woman, but said if you re-read the book, and you get to the paragraph in question, you’ll know. pic.twitter.com/jJeFMFyyoa

Is Donald Trump really having an affair with Nikki Haley? That's what author Michael Wolff seemed to hint in a bombshell claim on Friday.https://t.co/HLA00NuvGj

At this point it's mere speculation, but Michael Wolff has said that a paragraph toward the back of FIRE AND FURY reveals who Trump's current mistress is (an affair that opens the president up to blackmail) and many online are insisting that THIS is the paragraph Wolff refers to: pic.twitter.com/qVRiPjZ5yX

Donald Trump is having an affair with Hope Hicks. @realDonaldTrump #HopeHicks

So if Trump is having an affair, who is it with? One of the Trumpettes? Or Kellyanne Conway? Lol that’d be high-larious

I think I found the paragraph that @MichaelWolffNYC mentioned on @RealTimers to @billmaher . Last paragraph referring to an affair between Hicks and Trump? pic.twitter.com/uSVIiZCgKi

Others have expressed their support for First Lady Melania Trump.

@FLOTUS Just for the record, you are way hotter than @StormyDaniels or @nikkihaley or @IvankaTrump or anyone else @realDonaldTrump has slept with. #TrumpShutdown #TrumpAffair

However, it seems that most Americans are much more concerned with the government shutdown on the first anniversary of his presidency or have suggested that Wolff's hint is aimed at further boosting sales of his book.

Word on the street: it is rumored trump is having an affair in the WH. I don’t care. The whispers say her name rhymes with dope d*cks. I still don’t care. What I do care about: The government has shut down. #TrumpShutdown https://t.co/lwgBotMSHk

So why we were all watching our government shutdown Bill Maher was interviewing Wolff who claims Donald Trump is currently having an affair he just doesn't have the blue dress. Must watch Bill Maher's show

- #TrumpShutdown is underway
- He totally blew it
- Can't negotiate a deal
- Will he still golf tomorrow?
- Accused of White House affair
- Wait, what? Who? Eww!
- #shutdown is all Trump's fault
- Everything Trump touches dies
- It's still only 12:35am