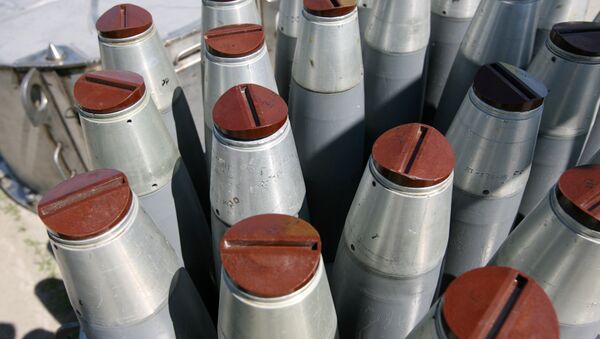 © Sputnik / Pavel Lisitsyn
/
Go to the photo bank
Subscribe
The Russian Defense Ministry stated that the United States was ignoring the objective evidence of chemical weapons' use by terrorists in Syria, targeted against the civilian population and the country's government troops.

The ministry went on by saying that the US attempts to blame the Syrian government for the use of chemical weapons have never been grounded by any hard evidence.

"The US administration is at best not showing any interest and often ignores the objective factors of terrorists using poisonous substances while fighting against government forces and civilians," the ministry said in a statement.

According to the Russian military, Washington has failed to fulfill their obligations on the destruction of chemical weapons, preserving at least 10% of their arsenal operational.

"Following our commitments under the Chemical Weapons Convention, Russia has eliminated its entire chemical warfare agents arsenal early, while the United States, using false pretexts, has at first halted and then completely stopped fulfilling its commitments due to a 'lack of financing,' still keeping around 10 percent of its arsenal in a combat ready condition," the ministry added.

The statement was made after on Friday the US State Department accused Russia of seizing every opportunity to defend Syrian President Bashar Assad, who allegedly used and continues to use chemical weapons, disseminating the corresponding report at the United Nations on January 9.

Following this move, Moscow urged the UN Security Council to give assessment of US attempts to distort facts around chemical weapons use in Syria.

"All the ongoing attempts by the United States to accuse the Syrian authorities of using chemical agents during the military actions against so-called 'opposition' are based exclusively on the rumors from social networks, militants testimonies, and have not been supported by evidence," the Russian Defense Ministry said.

The Russian Foreign Ministry has refuted allegations that chemicals had been delivered to Syria from Libyaand Iraq, noting, however, that these routes of delivery could really have been used, and the issue must be a subject to further investigation.

The Russian side reminded that it had provided facts proving that the Khan Sheikhoun chemical incident could have been plotted to damage the image of the Syrian governmental troops but this evidence was not taken into account during the investigation. The ministry also pointed out that all members of the OPCW Fact-Finding Mission represented NATO states or their allies, which raises an issue of the team's impartiality.

On October 26, the Joint Investigative Mechanism (JIM) presented its report on the incidents in Syria's Umm Hawsh on September 15-16, 2016 and in Khan Sheikhoun on April 4, 2017. According to the report, the government of Syrian President Bashar Assad is responsible for the use of sarin in the Khan Sheikhoun incident, while the Daeshis responsible for the use of sulfur mustard in Umm Hawsh.

Russia has pointed to the absence of tangible results in the work of the OPCW-UN mission on numerous occasions. The Russian Permanent Mission to the United Nationsstated that the JIM's report was based mostly on assumptions and the selective use of facts.