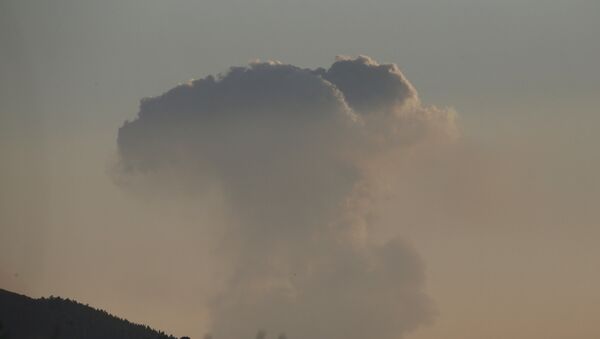 More than 70 Turkish military aircraft have been engaged in Ankara's Olive Branch operation in northern Syria against the Kurdish troop, according to Turkey' General Staff.

The Turkish Air Force attacked the Menagh Military Airbase in northwestern Syria, which the US used for supplying weapons to Kurdish armed forces, the Hurriyet newspaper reported citing military sources.

The newspaper noted that the airfield was among the 113 targets scheduled for the attack during Operation Olive Branch in Syrian Africa.

Commenting on the Olive Branch operation, launched earlier in the day, Turkey' General Staff announced that more than 70 Turkish military aircraft have been engaged in the offensive.

"The airstrikes were conducted against terrorist targets in seven districts of Afrin, where 108 targets were hit. Seventy two aircraft of the Turkish Air Force engaged in the operation have successfully returned to their bases," the statement said.

As the Rojahat Roj, the Press Secretary of the Kurdish Self-Defense Forces YPG in Afrin, told Sputnik, the Turkish military advance resulted in bombing of about 100 positions in the Afrin area, with no casualties among the YPG forces, but at least sevean civilians wounded. As he specified, the Turkish military and the Free Syrian Army (FSA) wanted to enter Afrin from the territory of the Bilbile district, but YPG forces managed to prevent the move. According to the spokesperson, clashes are ongoing.

The press service of the authorities of the Afrin canton told Sputnik that  at least 10 people were injured in airstrikes.

"According to the recent figures, 10 people were injured, including three people who suffered severe wounds. The list of injured people includes two children," the press service said, adding that local authorities had called on the residents of Afrin to donate blood for the victims of the Turkish airstrikes.

Despite the Ankara's assurances that they have notified Damascus about the operation progress, the latter has refuted these statements, vigorously condemning the move and calling it the infringement on the country's sovereignty.