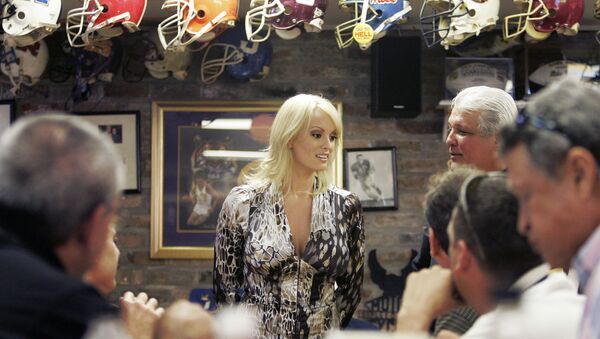 © AP Photo / Bill Haber
Subscribe
International
India
Africa
Accusations that US President Donald Trump and former adult film actress Stephanie Clifford, whose stage name is Stormy Daniels, had sex in 2006 have been denied by both the president and the actress, but an uncovered 2011 interview between Daniels and In Touch magazine says otherwise.

Allegations that the two engaged in sexual activity were first made by The Wall Street Journal, which also claimed that Trump's lawyer, Michael Cohen, paid Daniels $130,000 one month prior to the 2016 presidential election to sign a nondisclosure agreement.

In 2011 — predating the $130,000 non-disclosure agreement — Daniels was interviewed by In Touch, during which she discussed her sexual encounter with Trump. According to the magazine, Daniels passed a polygraph test and her story was verified with her friends and associates. On Friday, the magazine published a full transcript of her 2011 interview with the magazine.

Here are just a few of the more salacious details gleaned from the 2011 interview.

In addition, the adult film star claimed that Trump promised her a condo in Trump Tower Tampa, invited her to a Los Angeles launch party for Trump Vodka and to a Miss USA pageant. During phone conversations between the two, Trump allegedly repeatedly told the adult film star that "if you ever need anything, let me know," all while he was married to Melania, his third wife.

During another meeting in a private bungalow at the Beverly Hills Hotel, the president revealed his intense hatred of sharks to Daniels, while watching the Discovery Channel's Shark Week.

"He is obsessed with sharks. Terrified of sharks. He was like, ‘I donate to all these charities and I would never donate to any charity that helps sharks. I hope all the sharks die,'" Daniels asserted. "He was like riveted. He was like obsessed."

Daniels also recalled that although Trump rarely talked about his family, he spoke highly of one of his daughters — although it was not revealed which daughter he was referring to — comparing Daniels to the unidentified sibling in her 2011 interview.

"He told me once that I was someone to be reckoned with, beautiful and smart just like his daughter," Daniels said. "She is smart and beautiful, so I guess that's a compliment."

In his 2005 interview on The View, Trump raised eyebrows after remarking, "If Ivanka weren't my daughter, perhaps I'd be dating her."

When asked if she was attracted to Trump, Daniels responded "would you be?" However, she told In Touch that she was "fascinated" by the reality-TV star.

"I was definitely stimulated. We had a really good banter. Good conversation for a couple hours. I could tell he was nice, intelligent in conversation," Daniels said.

In addition, Daniels claims to have had direct phone numbers for his office. Trump reportedly called her every 10 days or so, always from a blocked number. However, their phone conversations stopped after Daniels stopped picking up calls from unrecognized numbers.