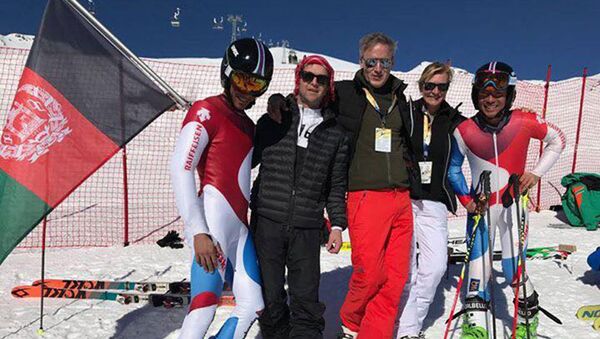 © Photo : Sajjad Hosseini
Subscribe
Two skiers from Afghanistan will take part in the South Korean Winter Olympics for the first time in their country’s history this year. One of them, Sajjad Hosseini, spoke to Sputnik about skiing in Afghanistan.

Skiing as a sport in Afghanistan is still very young. However, in recent years, the interest of young men and women in skiing has grown in the Bamyan province, which is located in the central part of the country. One of the coldest provinces of Afghanistan, Bamyan is often snowy during winter. Foreign skiers believe that snowy landscapes of Bamyan are a fitting place for skiing and other winter sports.

US Should Work With Russia and China to Bring Peace to Afghanistan - Journalist
Afghan athletes have held several competitions there. In 2015, Bamyan was inaugurated as the cultural capital of the South Asian Association for Regional Cooperation (SAARC). The competition included athletes from Afghanistan, New Zealand, Switzerland, France, Germany, England and Norway. Bamyan skiers managed to surpass their foreign competitors and take the three top positions.

But this year for the first time, Afghan skiers will take part in the Winter Olympics. Chairman of the Olympic Committee of Afghanistan Mohammad Zahir Aghbar and Chairman of the National Olympic Committee of South Korea Kim Kim Jung-haeng signed an agreement about the participation of two Afghan skiers in the 2018 Winter Olympics in South Korea. Those two athletes are Alishah Farhang and Sajjad Hosseini.

The 25-year-old Hosseini, who will take part in the slalom and giant slalom events, told Sputnik about the history of the sport in Afghanistan and about how the athletes prepared for the Olympics.

"I started doing skiing in 2012. It happened in the ski club of Bamyan, established by a Swiss man named Kristof Zurcher — it is the first skiing club in Afghanistan. Three years later I went to train in Sankt-Moritz [Switzerland], where I have trained for four years already."

"The history of skiing in Afghanistan started in 1970. Unfortunately, it was interrupted during the war, but in 2010-2011 it started to revive slowly. Our  club started with 10 people and now Afghanistan has 300 skiers already. Only the two of us have had an opportunity to train professionally. Such training requires going abroad, because there are no such opportunities in Afghanistan now. Unfortunately, the National Olympic Committee does not support us, that's why other athletes can't train. Until now we had no monetary support from those authorities. If they had just expressed their support, we would have displayed a lot more will and wish during competition and training."

Asked about how he managed to become an Olympic athlete, he said:

"The decision regarding our participation is not final yet. But we try hard and if we are to secure our place then we must pass several competitions before January 20. Then we will see if we go to South Korea or not… We don't hope to win a medal at all, because four years of our training is like one year of training by our foreign colleagues. It is enough only to take part in these Olympics, in order to pave the way for the next generation of Afghan skiers."