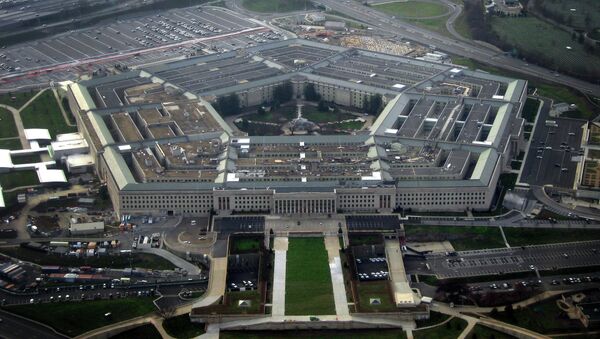 WASHINGTON (Sputnik) - The primary national security concern for the United States is superpower competition rather than fighting terrorism, US Defense Secretary James Mattis said on Friday in announcing the 2018 National Defense Strategy.

"We will continue to prosecute the campaign against terrorists, but great power competition — not terrorism — is now the primary focus of US national security," Mattis said in prepared remarks released by the Pentagon.

Earlier on Friday, the Pentagon released the new National Defense Strategy, which emphasized that the United States will now focus on a long-term strategic competition with China and Russia.

New US Defense Strategy: Work With Diplomats or Deal With Military
Mattis explained that Russia and China are a growing threat to the United States because of their authoritarian-like actions to circumvent other nations’ economic, diplomatic and security decisions.

In addition, the National Defense Strategy noted the United States is concerned about Russia’s decision to modernize and expand its nuclear arsenal.

Mattis explained the overall mission of the new National Defense Strategy is to enable the United States to remain a competitive superpower and prioritize preparedness for war.

The US Joint Forces Command will be focus its involvement in operations to stop aggression in three key regions: the Indo-Pacific, Europe and the Middle East, the National Defense Strategy said.

Mattis said that rogue regimes like North Korea and Iran are taking actions that threaten the stability in their regions and around the world.

Tensions on the Korean Peninsula have escalated over past year as North Korea continued to conduct nuclear and ballistic missile tests while the United States amassed significant military assets in the region and conducted exercises. In November, Pyongyang tested its most advanced intercontinental ballistic missile and claimed the weapon is capable of hitting any part of the US mainland.

Moreover, US officials have repeatedly said Iran is funding terrorist organizations causing instability throughout the Middle East in addition to attacking US interests in Syria.

Chinese Academic: US Security Strategy Rhetoric Evokes Memories of Cold War Era
President Donald Trump said earlier in January he would sign a waiver on sanctions required by the 2015 nuclear deal unless the agreement is modified. Trump also announced his intention to toughen anti-Iran sanctions over Tehran's ballistic missiles tests.

The new National Defense Strategy said the North Korean government seeks to ensure its survival and the ability to coerce neighbors by having a combination of conventional and unconventional weapons.

"North Korea seeks to guarantee regime survival and increased leverage by seeking a mixture of nuclear, biological, chemical, conventional and unconventional weapons and a growing ballistic missile capability to gain coercive influence over South Korea, Japan and the United States," the document said.

The strategy also noted that North Korea has "increased efforts short of armed conflict by expanding coercion to new fronts, violating principles of sovereignty, exploiting ambiguity and deliberately blurring the lines between civil and military goals."

US to Reinforce Efforts of Counterterrorism Operations

The United States will develop coalitions in Afghanistan, Iraq, Syria and other countries to build on the progress made against terrorist organizations as well as to counterbalance Iran’s influence over the region, the New Defense Strategy said.

Mattis noted that the caliphate of the Daesh terror group has been defeated, but violent extremist organizations continue to spread violence around the world.

The North Atlantic Treaty Organization (NATO) is set to deter Russia in Europe, and its commitment to Article 5 is essential to US security, the National Defense Strategy said.

World
NATO Sees Russia as 'Peer Competitor' - Senior Military Officer
"A strong and free Europe, bound by shared principles of democracy, national sovereignty, and commitment to Article 5 of the North Atlantic Treaty is vital to our security," the document said. "The alliance will deter Russian adventurism, defeat terrorists who seek to murder innocents, and address the arc of instability building on NATO’s periphery."

The strategy emphasized that Russia has set its sights on disrupting NATO and altering the political and economic dynamic in Europe and the Middle East to further its own national interests.

In addition, the strategy said Russia is "now undermining the international order from within the system by exploiting its benefits while simultaneously undercutting its principles and ‘rules of the road.’"

Mattis pointed out that as part of the efforts to remain a competitive superpower, the United States will make investments in space and cyberspace as well as in nuclear and missile defense.

"We will modernize key capabilities," Mattis said. "Investments in space and cyberspace, nuclear deterrent forces, missile defense, advanced autonomous systems and resilient and agile logistics will provide our high-quality troops what they need to win."

From Bush to Trump: Evolution of US' National Security Strategy
The United States will also modernize its nuclear triad and invest in missile defense in order to deter external aggressions, the National Defense Strategy said.

Aside from weapon developments, Washington is also aiming to build a more lethal force by establishing new alliances with other countries, Mattis said.

Trump has repeatedly stressed the importance of providing the US military with adequate funding to build up its capabilities.