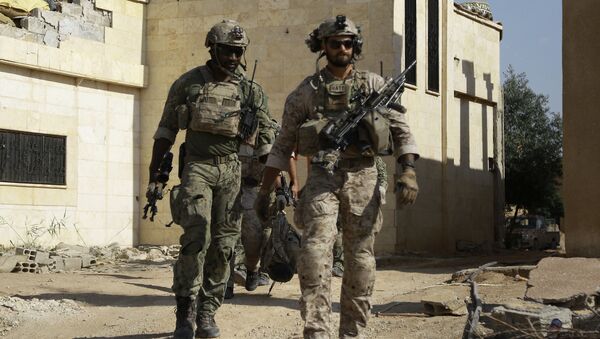 © AFP 2023 / DELIL SOULEIMAN
Subscribe
International
India
Africa
Ekaterina Blinova
All materialsWrite to the author
The destructive US Mideast policies aimed at inciting ethnic and religious strife pose a real threat to Syria and its neighbors, Canada-based political analyst Oussama El-Mohtar told Sputnik. The analyst suggested that only a strong secular democratic state could become a viable model for the Syrian Fertile Crescent.

"One fundamental principle of US foreign policy has been the creation and support of exclusive states until they fail," Canada-based political analyst Oussama El-Mohtar told Sputnik, shedding light on America's Mideast strategy.

The political analyst explained that the "exclusive state" is a state where citizens are not treated equally under the law.

"One group or more could be excluded from fundamental natural rights, or one group or more could appropriate superior rights the exclusion of others. Exclusion could be based on race, ethnicity, language, color, religion, sect, tribe, family, special interests, military or class. An exclusive state cannot be a democratic state," El-Mohtar elaborated.

Turkey’s Operation in Syria’s Afrin Does Not Serve Its Interests - US State Dept
By contrast, the "inclusive state" is a state where all citizens are treated equally under the law, the scholar said, adding that the latter is usually a democratic state.

The analyst pointed out that in the Middle Eastern Fertile Crescent, which includes Iraq, Syria, Lebanon, Jordan, Palestine and Israel, "an exclusive state is less likely to survive than anywhere else due to that region's diverse population mix, its unique geographical location, its coveted rich resources and the delicate balance among its neighbors."

The question then arises as to why the US continues to sow discord in the region by exploiting ethnic, religious and social differences and inequality.

According to El-Mohtar, it is the old colonial model that is behind the controversial trend.

"The American trend in its foreign policy has been to place 'exclusivist' leaders on weakened countries," he pointed out. "Those leaders would be dependent on the US for survival. They would allow it to devour their countries' rich resources while flooding their markets with US goods at very high prices. The leadership becomes wealthy, the population poor and oppressed, while Uncle Sam smiles benevolently."

US Military Stationed 1,000 PYD Militants on Turkey-Syria Border - Reports
To tackle the problem, a strong secular inclusive state should become the backbone of the Syrian Fertile Crescent, the analyst believes.

"The Syrian Fertile Crescent is surrounded by three religious states: a Muslim Brotherhood Sunni state in Turkey, a Wilayet Al-Faqih Shiite state in Iran and a Whahabi Sunni State in Arabia. Embedded in its heartland, Palestine, there is a Jewish State. These are four exclusive states that will invite similar aspirations and that will be perpetually at war, directly or through proxy," El-Mohtar said.

The scholar warned that Syria and the rest of its neighborhood cannot survive such a state of affairs. "War and desertification are true existential threats to millions of people," he stressed.

Having said this, the analyst suggested that Russia, a proven global power, can reverse the trend promoted by the US and, previously, by European metropolitan states, in the region.