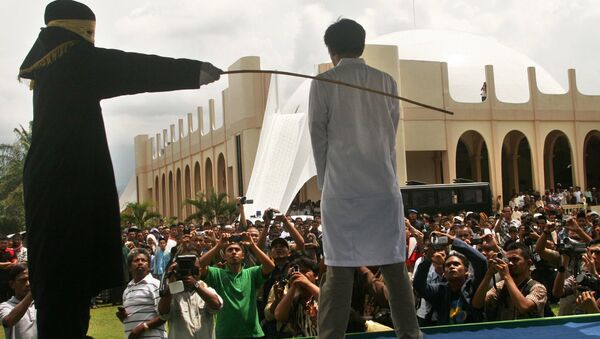 © AP Photo / Heri Juanda
Subscribe
Aceh, despite being a part of the world's most populous Muslim-majority country, is Indonesia's only province that implements Islamic law.

"This is our government's commitment to enforcing Islamic law," said Aminullah Usman, mayor of the provincial capital Banda Aceh, adding that "if there is a violation (of the law) immediately report it to the sharia police and we will carry out a punishment like today's caning."

Simbolon was arrested in October for selling illegal alcohol and sentenced to 36 lashes with a rattan stick. A doctor checked the convicts' health after 10 stokes, before allowing the punishment to continue.

Germany's Top Court Repeals Acquittals of 'Sharia Police' Members
Simbolon was one of 10 people, including eight men and two women, convicted after Friday prayers for crimes that included pimping, prostitution and gambling.

An unmarried couple received 10 strokes for having physical contact deemed too close and seen as a prelude to sex.

However, Simbolon is only the third non-Muslim citizen to undergo a public beating since 2001 — the year when Aceh, situated on Sumatra island, gained special autonomy and began implementing Islamic law.

Aceh is 98 percent Muslim and enforces Islamic law known locally as Qanun. Non-Muslims, who have committed offenses that violate both — national and religious laws, can choose whether they want to face a criminal or religious punishment.

According to chief prosecutor Erwin Desman, Simbolon may have chosen caning in order to avoid lengthy criminal prosecution.

Aceh is the only province in Indonesia, the world's most populous Muslim-majority country, that implements Islamic law.

000000
Popular comments
They flog us Christians, we give them free money. The religion of peace got us beat, sadly.